A Glimpse Into Homeless Populations 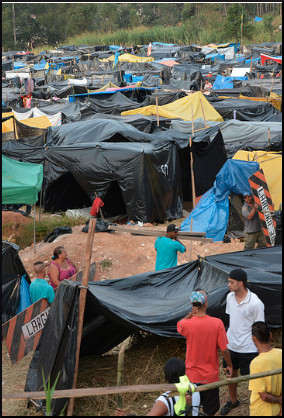 The 2015 Annual Homeless Assessment Report (AHAR) to Congress, available as an 80-page PDF file, is the most recent and comprehensive federal report on homelessness in America.

In any discussion of homeless statistics it is important to remember that information-gathering in this area is not an infallible science. House the Homeless has discussed the many difficulties before. All statistics come with caveats, or should, but for the purpose of this post, we take the AHAR numbers on faith.

Another problem connected with such endeavors is expressing the final numbers in meaningful ways. One person experiencing homelessness may belong to many subgroups: female, veteran, Hispanic, family member, disabled, and so on. It is beyond the scope of this post to thoroughly examine the numbers in all groups and all their implications.

Perhaps most worrisome is the subcategory known in the report as “Chronically Homeless Families with Children.” Almost two-thirds of people in this classification were staying in shelters (64%, or 8,412 people), and the rest lived in unsheltered conditions (36%, or 4,693 people).

Of all homeless people in families, 48.7% — that’s almost half — are African American. Of that number, almost exactly half live in shelters. Different as they might seem, families have something in common with veterans. A total of 12.8% of the people in the U.S. identify as African-American and 15.45 as Hispanic, yet 56% (well over half) of homeless veterans belong to one of those two groups. The technical term for this is “over-represented.”

Children are relatively easy to keep track of because of mandatory education. But the census-availability spectrum has another end. Veterans who don’t want to be counted, or are so far out of touch that they don’t even think about it, are a slippery and elusive bunch. In some of America’s gnarliest backwaters small bands of dedicated vets search for their lost comrades in order to connect them with services.

Nationally, since 2009, the total number of homeless vets is said to have decreased from 73,367 to 47,725, which is encouraging. On the other hand, the percentage of homeless women vets has risen disproportionately to their number. Female vets are twice as likely, or even three times as likely, to be homeless as any other population group.

Particularly worrisome is the fact that “About one-half of all veterans experiencing homelessness who have participated in VA homeless assistance programs are involved in the justice system.” This overlap is the basis of the vicious cycle that many veterans are caught in. Their lives alternate between incarceration and the streets in classic “revolving door” fashion.

It’s hard to discover whether incarcerated vets and VA hospital inpatients count as homeless. On the darkest side of the equation, it has been pointed out that many vets have evaded showing up in the homeless statistics by committing suicide.

Almost all housed Americans hold some kind of mental stereotype that probably doesn’t match up with who the people experiencing homelessness actually are. Many picture a brash young panhandler, or a teenage girl who meets men at truck stops. Shockingly, more than half of the homeless population is older than 50, but the distribution across decades is not smooth. “Older” persons between 50 and 64 constitute a big demographic bulge. The National Coalition for the Homeless says:

There is a relatively low percentage of ‘elder’ (aged 65 and over) homeless persons’ among the current homeless population. This smaller proportion may be due to the increased availability of successful safety net programs, which only kick-in at a certain age including:

Still, the waiting lists for subsidized housing are long, and a basic problem faced by many people lack of documentation. A person can spend decades on the street with no paperwork, but for many, the attempt to hook up with services sets off a chain reaction of bureaucratic demands and Kafkaesque frustration.