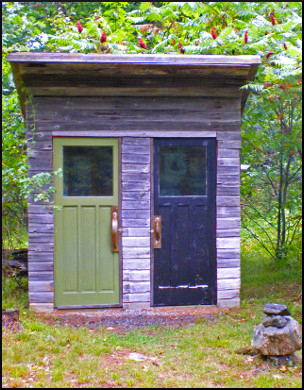 House the Homeless has been discussing the absurdity and the inhumanity of depriving people of toilets, and even worse, the insanity of criminalizing natural functions. The subject frequently comes up in the press. Earlier this week Daily Mail.com, always an enthusiastic purveyor of American showbiz news, published a whole series of photos from the making of an episode of the TV series “Girls.” Walking in the SoHo district of New York, star Lena Dunham reacts with consternation when she passes a squatting man.

In many American cities, this type of scene is all too frequently real. In San Francisco, web developer Jennifer Wong used a Department of Public Works database to create a map spotlighting all the locations from which six months worth of human waste complaints were reported by phone.

In places that have them, public restrooms are often locked at night. Bus terminals and train stations may be an option, but even if homeless people can slip in to use a toilet, such activities as sponge bathing, shaving, and sock washing are discouraged.

In Denver, Ray Lyall of Homeless Out Loud told a reporter:

There’s literally 10 restrooms that you can actually use without anybody saying anything to you… Most of those are only open during their hours of operation, so there are only two that are open 24/7.

In Austin, Texas, the subject has been a contentious one for years. Back in the autumn of 2009, journalist Marc Savlov explored some of the issues connected with the downtown presence of Caritas, the Salvation Army, and the Austin Resource Center for the Homeless (ARCH) and found that…

Unfortunately, the location of all three major social services outreach groups — smack in the middle of the entertainment district and within a one-block radius of both a major liquor store and the long strip of rowdy, alcohol-fueled nightlife — has inevitably drawn fire from Sixth Street area merchants and stakeholders, pleading, “Not in our front yard.”

At the same time, plans were being made for an extensive downtown re-do centered around Waller Creek. Users of the Yelp website discussed it at length, and one person pointed out the irony of attempting to get rid of the homeless residents so the “post frat drunken tourist district” could flourish and, no doubt, create more homeless people, as both drinking and gambling have been known to have that exact result.

In 2011, the Waller Creek Conservancy announced an international competition for a master design plan. Members of the public commented that the area would still be a “giant alky toilet” and vowed that “the bums will have to be driven out.”

You can have all the dreams in the world of what Waller Creek is to be like, but it’s not going to happen if we don’t deal with the transient population. The City Council needs to step up to the plate and pass stronger laws and insist that the police enforce them and the judges back them up.

Two years later, nothing had been solved and the First United Methodist Church sent out a distress call. It was providing services for people experiencing homelessness, but because of the lack of public restrooms, the church property was acquiring an “overpowering” smell of urine. Because of the same lack, certain businesses take the brunt of the inconvenience, like chain coffee shops that are open when overnight shelters turn their patrons out into the streets.

One school of thought holds that all restrooms located in businesses should be available to anyone. This is unlikely to happen, because the NIMBY, or “Not In My Back Yard,” sentiment only becomes more intense with “Not In My Bathroom, Yo.”

A politician suggested that churches should take over bathroom duty. Imagine a future in which churches are both punished for feeding people, and at the same time pressured to provide access to their restrooms. The same guy recommended that people should pester whatever staff members are on duty at the shelter during its officially closed daytime hours.

House the Homeless President Richard R. Troxell works at ARCH, providing pro bono legal help for clients. If put in charge of the bodily functions problem, what would he do? He says:

First, as Toilet Czar I would encourage all the employers on famed 6th Street to act as Ambassadors, and to open up their facilities to all users regardless of gender, etc. And I would place portable toilets at park and trail heads and recreation areas.

Private citizens would have access through pay-as-you-use coin operation. Homeless individuals would acquire tokens from any of the shelters or service organizations upon request.

Then I would create automatic toilets that would have deep sink facilities and cell phone charging capabilities. These would be drawing cards to encourage people to leave the creek areas for washing and defecation purposes. There would be visibly open bottoms so users would be discouraged from inappropriate activity.

Periodically, the toilets would automatically lock to outside access at stated times. After 20 minutes, an internal flush system would hose down the facility three times a day.

We should seek funds from the Restaurant Association, the local Chamber of Commerce, Health and Human Services, the Municipality (the City of Austin), Parks and Recreation Department (and therefore the sporting goods industry), the federal government under the McKinney-Vento Homeless Assistance Act, and the Centers for Disease Control.