For Children and Youth, a Couch Is Not a Home 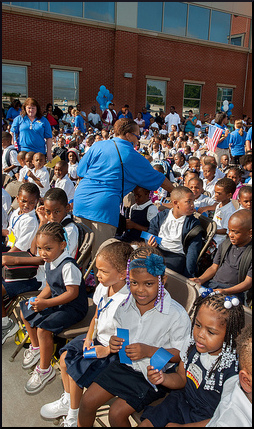 The number of public school students experiencing homelessness has doubled since the recession, over a number that was already too large. Now, an estimated 3% of public school kids are homeless, which is of course an average. Depending on the city and state, it varies wildly.

These words are from Lyndsey Layton and Emma Brown:

The impact is profound on public schools, which struggle to try to address the needs of homeless children. Teachers often find themselves working not only to help children learn but also to clothe them, keep them clean and counsel them through problems — including stress and trauma — that interfere with classroom progress.

Transportation is another issue that teachers find themselves dealing with. School districts have different rules about who has to be taken where, and when and how. The parents of homeless children may not have a car, and anyway they are expected to be either working or looking for work. Kids need school supplies. They need a table somewhere to do their homework on. Mostly, they need stability and peace of mind.

The Homeless Children and Youth Act was introduced in January of 2015. Its point was to expand the official Dept. of Housing and Urban Development’s definition of homelessness on behalf of an estimated million kids and their families, whose lives would be affected. The website of California Senator Dianne Feinstein describes the proposed legislation in detail.

Access to federal housing programs is complicated by confusion among governmental entities over what constitutes homelessness. Sen. Feinstein gives two examples of the results, applicable to her own state and another:

In California, 259,656 children experienced homelessness last year, while HUD counted only 25,094 households that included at least one child as homeless. Due to the narrow HUD definition, only one in 10 homeless children in California is eligible for federal housing programs.

In Ohio, 23,748 children experienced homelessness last year, while HUD counted only 4,714 households that includes at least one child as homeless. Due to the narrow HUD definition, only one in five homeless children in Ohio is eligible for federal housing programs.

One in five is a best-case scenario? That’s crazy. And it doesn’t even mean the family will find housing — only that it is eligible to apply. The National Network for Youth website is a trove of information about the Homeless Children and Youth Act, and their page includes simple instructions for writing to the appropriate members of congress.

One interesting bullet point states that the HCYA…

Prohibits HUD from overriding local communities. Local service providers are the best equipped to evaluate which homeless populations have the greatest unmet needs.

Basically, one aim of the bill is to encourage the federal government to trust local agencies and take their word for it that someone is homeless. Briefly, some of the other sections concern data collection, reporting requirements, and transparency; and simplification of documentation needed to prove eligibility for housing programs.

That documentation requirement is frightening. Imagine a woman going back to the violent husband she escaped from at great risk. “Excuse me, would you mind writing a letter stating that we left because you brutalized me and two of our three children?” Good luck with that.

To learn exactly and in detail why the current rules are problematic, this page explains it fully. We learn from the U.S. Congress website that, despite the fact that 400 organizations are on board with support of the bill, the last action taken was its referral to the Committee on Banking, Housing, and Urban Affairs in January of last year.

In April of 2015 the U.S. Senate Appropriations Transportation, Housing & Urban Development Subcommittee held a hearing on HUD’s Efforts to Prevent & End Youth Homelessness, at which singer Cyndi Lauper related how she was a homeless teen who found a doorway back into society through a youth hostel that helped her earn a high school diploma.

We can end youth homelessness in America, but we have to get to the root of the problem. Our country must invest in preventing kids from becoming homeless in the first place, and this is an area of focus that has largely been ignored. That means helping families. It means fixing our broken child welfare system, our flawed juvenile justice system, and our schools. Each one of those places can be a doorway to homelessness or to a better future.

House the Homeless urges everyone to watch the video “Kids 4 Kids Sake” and share it with the candidates who are running for president! In fact, please do what you can to bring it to the attention of all candidates for everything, anywhere. Tweet it, share on via social media, contact the candidates directly, and ask your friends to do the same.