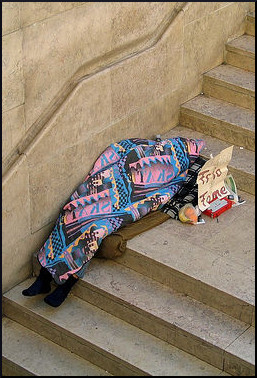 Today, in the holiday spirit, we concentrate on some good things. Mainly, there is still time to contribute to this year’s Thermal Underwear Drive sponsored by Austin’s House the Homeless, so please keep it in mind. Other than that, we collected a few stories of people who make a difference to America’s displaced persons.

In New York, the TimesUnion published the story of how a 10-year-old 5th-grader named Elizabeth Floud emptied her savings account to buy pizza for people staying at the Shelters of Saratoga. Reporter Wendy Liberatore relates how Elizabeth’s mother realized that $30 wouldn’t be enough for 40 people, and took it to the next level:

So she started a gofundme page, Pizza for the Less Fortunate. She and Elizabeth aimed for $150, but attracted $585. Bucciero’s Pizza in Mechanicville heard of the drive and decided to donate all the pies.

That left $200 to give to the Shelters of Saratoga for future needs, with the remainder going to the food pantry of the local Community Center.

In Washington, D.C., two months ago, Floyd Carter met a married couple who decided to skip their usual Christmas gifts for each other and help Carter get a place to live after three years of homelessness.

Rachel and Erik Cox are both attorneys who understood the reality that a housing voucher, which Carter had already had for months, was worth nothing unless a landlord would actually rent him an apartment. Somehow they made that happen. Since becoming a housed person, Carter, whose ultimate goal is to become a chef, has received job offers that could be the initial ladder rungs to take him there.

On the other side of the country, in Orange County, California, nurse Julia Cross was celebrated by the Orange County Register as one of its 100 most influential people. Cross is a licensed vocational nurse who makes rounds on her bicycle, covering a 40-mile route twice a week to visit homeless camps and give medical aid to those who are unable or unwilling to obtain it from other sources.

Along that stretch of the Santa Ana River, sometimes called “Skid River,” the already high number of people experiencing homelessness has grown by 500 over a very short time. Not surprisingly, veterans of the Iraq and Afghanistan conflicts are among the residents.

People here live without running water, electricity, heat. Some are mentally ill. Others are addicts. Many are both.

But listen patiently and you hear wisdom, reminders of how mortal we are; how a twist or turn can send any life on a spiral no one would want and some can’t escape…

Each person Cross treats […] has a unique and telling story filled with caution, struggle and, often, optimism.

Working through the nonprofit Illumination Foundation, the nurse not only dispenses first aid but works toward the end of homelessness. Earlier this year, the newspaper featured a long article about her activities, which include visits to the infamous Skid Row area of nearby Los Angeles.

Whiting quotes Julia Cross, daughter of a doctor who “never billed a patient who couldn’t afford it”:

I think the tide has to turn, that society has to embrace the concept that the healthier we are, the less cost there is to take care of the sick. Without adequate health care, the whole house of cards collapses.

Oh, and did we mention the Thermal Underwear Drive?

Source: “10-year-old gives up savings to feed homeless,” TimesUnion.com, 12/22/16
Source: “Homeless man gets new home thanks to couple who forfeited their own Christmas for him,” KLEWtv.com, 12/23/16
Source: “Most Influential 2016: Julia Cross is a nurse who helps the homeless,” OCRegister.com, 12/24/16
Source: “Nurse makes her rounds at an unusual place — a homeless camp by the Santa Ana River,” OCRegister.com, 05/12/16
Photo credit: fotografar via Visualhunt/CC BY-SA