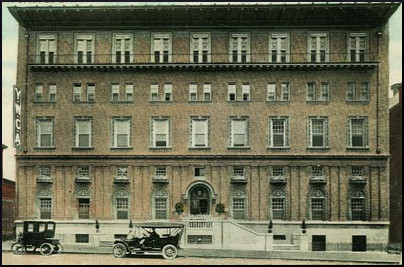 This spring in St. Louis, Missouri, an alderman proposed a bill that would effectively criminalize the unlicensed giving of anything to homeless people. Such items as blankets and bottled water could only be distributed if the giver had a vending license.

It’s wrong. It’s a fraud the way they’re going at this. People are hurting and they should not penalize, nor criminalize, either the homeless or those who want to help the homeless.

NLEC was founded in 1972, its first home the trailer where Rev. and Mrs. Rice lived. Later, it occupied a Victorian fixer-upper, and featured a coffeehouse, guitar music, and puppet shows. It also nurtured the people Rice called “the hurting and the homeless.” When the couple’s first child was due to be born any day, they learned about adversity firsthand:

When Penny went to the clinic to see about her rash and her swollen legs, they wouldn’t accept her because I didn’t make a regular income.

Before long, the NLEC offered not only emergency housing, but help hotlines, free clothing stores, counseling services, a youth center, classes, a leadership training program, and two publications, and did outreach work with penal institutions, hospitals, and the like. They were able to buy the old YWCA on Locust Street, the five-story building in which the Center still resides (pictured on this page.)

In the ensuing 40 years, increasing downtown gentrification has made the NLEC’s presence undesirable. Apparently a bar called Blood & Sand is particularly resentful. Developers, investors, and speculators see the Mission as standing between them and their own mission of gaining greater wealth. But ironically, for many of the neighbors it would be silly to say “Not in my backyard” because technically the area has been the NLEC’s backyard since 1976.

Generally, 50 or so people would actually live at the center, which presented a problem because the occupancy permit was for only 32 beds. Authorities claim that as many as 300 street people sleep there at night, and Rice admits to around 200. The city tried to close the NLEC in the spring of 2015, with the mission’s attorneys arguing that the city must not be allowed to repress the carrying out of religious duties.

Last month, another effort was made to displace the NLEC. The city’s Department of Human Services spokesperson Eddie Roth explained to reporter Elliott Davis that the institution is close to the public library, a children’s park, and a school attended by least 500 teenagers. Even though police conduct surveillance of the area from parked cars for 16 hours a day, the Mission’s presence is seen as posing unacceptable dangers.

Roth said all the city’s other “dozens of facilities” conduct their affairs in a way that is respectful to their neighbors. What he characterizes as a lack of respect is the way NLEC donors hold up traffic while dropping off loads of clothes and food, especially on Saturday mornings.

Meanwhile, an online petition objecting to Bill 66, the “Anti- Good Samaritan Law,” garnered 1,500 supporters. The measure was supposed to have been voted on in September, but the official government web page mentions no activity beyond the first reading in May.

City spokesperson Roth also charged that the NLEC acts as a magnet to draw homeless people from the entire region into central St. Louis where they are given shelter for a month and then turned loose on the streets, increasing the burden on the city’s other homeless services.

We close with a few cogent points made by Bill McClellan in the St. Louis Post-Dispatch:

Officials have asked members of the St. Louis Homeless Services Network if they could pick up the slack if the city were to close Rice’s New Life Evangelistic Center. The answer has been, no, we could not pick up the slack.

Rice […] provides an indispensable service, and he does so without public money.

If you’re a homeless man and you call the city’s Homeless Hotline […] you will likely be directed to New Life. Yes, the city regularly refers people to the shelter it has voted to close.