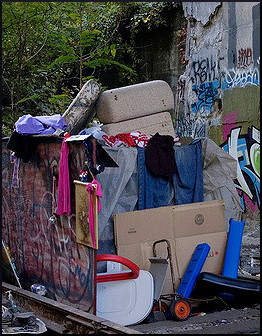 There are reasons why a reporter chooses a certain individual for the “Face of Homelessness” type of article, just as there are reasons for picking the ideal subject for a “Face of Single Motherhood” story or a “Face of Traumatic Brain Injury” story. Last week, House the Homeless looked at a long profile written by John Flynn and Matt Kramer of Sacramento.

Their subject was Russell Bartholow, a Native American man who had been homeless for 15 years after a series of familial, medical and legal misfortunes. Russell had collected, at that time, 190 citations related to his lack of a permanent abode.

The things that happened to him as a person experiencing homelessness are typical of the experiences of many other homeless people. He had lost all his teeth. On the streets, he had been severely beaten several times, and once was set on fire, which resulted in a long, painful, and expensive (to the taxpayers) hospital stay.

A basic absence of justice

Homeless people are told to get jobs if they expect to eat, and told to stop begging and to quit trying to live off the fat of the land, and to pull themselves up by their bootstraps, and so on and so forth. Not only are they blamed for their condition, but when they attempt to better themselves they are punished for it.

For instance, Russell Bartholow decided to feed himself by planting a garden. At a 2015 press conference publicizing the (unsuccessful) Right to Rest Act, he told a crowd at the State Capitol building about this foray into self-reliance. The writers quote him:

I had a beautiful garden, spent two-and-a-half years growing it. They came in and poisoned it with herbicide. Destroyed it.

How have we managed to create a world where growing food is illegal? Aside from all the other obvious and blatant absurdities of this stance, there is the hypocrisy issue. How can society yell about jobs — as if getting one were so easy — and berate people experiencing homelessness, and then prosecute those same people for growing food to feed themselves?

It was not his best-ever decision, but, Bartholow decided to eat the remaining vegetables, and fell sick. He believes the chemicals gave him cancer, though he might have already had it. While hospitalized, he saw his niece’s name in the local newspaper and reached out to her. In February of 2015, they met, and Jessica Bartholow became an advocate.

Flynn and Kramer describe how she turned things around:

Jessica had to overturn official government records declaring Russell deceased. She then got to work securing Russell a birth certificate, an identification card, a cellphone, Supplemental Security Income, health insurance and a spot at a methadone clinic.

There, he met an old friend who needed a roommate, giving Russell a place to live after shelters and hotels had turned him down due to lack of space and/or Russell’s lack of paperwork. He made friends on Facebook and reconnected with his son, Kieran.

“It was a couple months of advocacy, just a couple of hours at a time,” Jessica said of that period. “It didn’t take that much to find somebody a home and dignity and safety.”

She did not stop with helping her uncle, but became an activist for the Right to Rest legislation. Russell Bartholow also became a signature gatherer, but lived his remaining months in fear and uncertainty. There were still dozens of active warrants out on him, mostly for failure to appear in court to face various accusations, such as sleeping in the wrong place.

In this way, he was like many other people experiencing homelessness, who avoid contact with authorities because once they are “in the system,” who knows what negative details might turn up?

Before Bartholow had spent even two years indoors, cancer claimed him. His son came to say goodbye. While the Right to Rest law failed, California had just passed its Right to Die law, and in October of 2016 he took enough pain medication to avoid waking up again.