Anything for a Roof in America 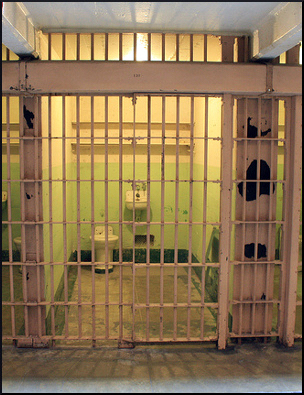 House the Homeless looked at the worldwide dilemma of people who commit crimes for the specific purpose of being locked up. Jail or prison may be just as dangerous as the streets, but at least there are laws requiring that inmates be fed.

Then, we zeroed in on the U.S.A. But the subject is not finished with. Last week’s post only highlighted some of the less serious crimes done in the name of finding refuge. Purposeful incarceration is sometimes a tactic with higher stakes, or at least with more considered long-range planning.

In Illinois, David Potchen told authorities he would plead guilty to a bank robbery only if he received the maximum sentence of eight years. He had been released from an earlier bank robbery sentence after serving more than 12 years, and was able to find a job.

But then Potchen was laid off, and could find no other work within walking distance of the motel where he lived, and was evicted. After spending one night in the woods, he took a little over a thousand dollars from a bank teller and then sat outside on a chunk of concrete to await the police.

In Oregon, a man asked people to call 911, and used other means of trying to annoy the local police enough to lock him up, including a false report of being hit by a car. Finally he handed a bank teller a note that said, “This is a holdup. Give me a dollar,” and sat on the bank lobby floor awaiting arrest. He told the authorities and the press that he needed medical care.

In Washington, Naina Bajekal reported on a man who gave a bank teller a note demanding one dollar. She writes:

The note explained that Gorton, 64, had no weapons and didn’t want to hurt anyone. After being handed the dollar, he waited outside for police to arrest him…

Six months earlier […] Gorton walked into a bank and handed over a note saying: “This is a robbery.” He asked for $1,400 and waited for police to arrive and arrest him. He told police he would soon be homeless because he hadn’t paid his rent. Until that incident, Gorton had no criminal history.

In Wyoming, a 59-year-old woman passed a demand note to a bank teller and accepted several thousand dollars. Outside, she offered some of the cash to passing strangers, threw some of it in the air, and sat down to wait for the police. “I want to go back to prison,” she told them plainly. She had been there before, and found it preferable to being assaulted on the streets. Liz Miller’s report, which describes the challenges faced by former inmates, is recommended in its entirety.

A Nevada man who wanted to return to prison brandished a steak knife to rob a bank. He had been convicted of at least five previous robbery charges. Despite having stayed free for eight years, he just couldn’t manage life on the outside. At age 78, what else was he going to do? Although his public defender inexplicably asked for a shorter term, the geriatric thief was sentenced to 15 years, which will probably solve his housing problem for the rest of his life.

A Tennessee woman stabbed herself in the shoulders, stomach, and leg, and filed a false domestic violence complaint, alleging assault by an ex-girlfriend. She had hoped to be admitted to a women’s shelter, but went to jail instead.

Also in Tennessee, a man recently released from prison was arrested on charges of vandalism, disorderly conduct and resisting arrest. Just to insure that he would be re-incarcerated, he also confessed to an invented murder and threatened to “kill everyone and himself.” A sheriff’s department captain said:

It’s really sad to see someone that gets in such shape that he had rather be in jail than anywhere else.