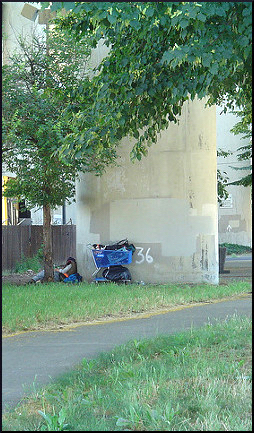 Especially in the wake of recent climate disasters, the nation’s highways, bridges, and overpasses are in sorry shape. It follows that the renovation of the antiquated infrastructure must be a good thing, right?

Of course it is — for all but about 100,000 Americans. That is the estimated number of people experiencing homelessness who will be displaced and traumatized if every needed project in those categories actually gets done. Nationally, on average, it appears that each bridge or overpass provides a “roof” for between three and five individuals who make their homes beneath it.

In Austin, Texas, for instance, the renovation of the IH35 (Interstate Highway 35) corridor alone comprises more than 50 major projects. To accomplish this massive, multi-million dollar undertaking, an estimated 200 people will be forced to evacuate their humble dwellings, with nowhere to go. (If better accommodations were available, wouldn’t they already be there?)

These Americans are likely to be physically disabled, mentally unstable, and yes, even addicted. They may have zero money.

I know that it takes 12-18 months to get disabled folks a disability check ($735 per month, which houses no one but can be coupled with subsidy dollars to house people when and if there is housing stock).

The folks we are talking about may not even have the all-important “papers” that are required before a person is even recognized as existing. The details are daunting, and as local Director of Legal Aid for the Homeless, Richard is very conscious of all the roadblocks, and especially of a sore point that very much affects the homeless advocacy community.

Our housing stock has been depleted with 15,000 Katrina survivors, the veteran’s push (which only housed the mentally stable vets) and another 5,000 Harvey survivors. Note that these people all line-butted in front of other homeless people who have been waiting for housing and wage relief for years.

Imagine the city as a gigantic air mattress. When a person sits on it, air is squashed out from under them, and moves to another part of the mattress, which bulges more. If another person sits on the other side, the air inside moves around again. But the mattress still contains the same amount of air.

What we are saying here is, when people experiencing homelessness are dislodged from their locations, they inevitably wind up somewhere else — perhaps the hospital. The average unhoused individual might have enough funds to pay for three to five minutes in a hospital, if that.

Or they might commit a crime for the deliberate purpose of being incarcerated. The bills will mount up, and this pointless, costly game of musical chairs is paid for by the population at large. It takes money from everyone’s pockets — more, in the long run, than actually housing the tiny percentage of Americans who are not in tip-top condition. The forgotten people need a way back into society that is not just another temporary fix.

In this, as in so many ways, Austin is a leader. What happens there is predictive of how things will go in other places — the civilized and caring places, anyway. It will take extensive collaboration between local, state, and federal bureaucracies, but if Austin can figure it out, that will be a great benefit for people experiencing homelessness throughout America.

Richard is working with TxDOT (Texas Department of Transportation) to create a model project that will set the standard and be emulated by other American cities that embark on much-needed renovations. A financial commitment for “Displacement” needs to be figured into the equation.

He calls for the housing of people to be included in every highway budget under a specific line item, saying:

It should cover all temporary transitional housing costs while surrounding communities can create the needed housing.

In the best-case scenario, the U.S. Department of Housing and Urban Development would simply house the displaced people, rather than continue to shuffle them around from pillar to post, as the old expression goes. There were public meetings, attended by representatives of TxDOT who initially labored under the misapprehension that a bunch of folks could be housed with the snap of a finger or the wave of a baton.

Again, if this were so easily done, seems like it would have happened already. If there was another place for the unauthorized dwellers to be, either temporary or long-term, they would probably already be there, and the issue would not even arise now. So to ignore that significant fact is rather disingenuous, to say the least.

Still, TxDOT has been instrumental in bringing together key organizations and elected officials to figure this thing out. This blog will follow along to observe, cheerlead, and encourage the people of Austin to aspire to make this a model project.

Photo credit: born1945 via Visualhunt/CC BY