Memoir of a Homeless Czar 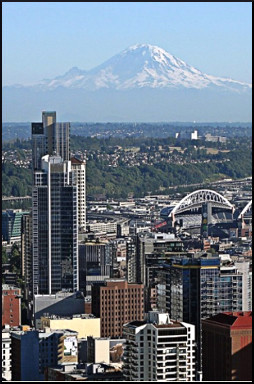 Actually, in King County, Washington, there is no such thing as a “homeless czar,” and that might be one of the problems, according to Mark Putnam. Until last month, he was executive director of All Home, the coordinating board that serves the whole county. Before that, he worked for almost two decades in the homelessness alleviation field. Putnam explained to interviewer Jonathan Martin that responsibility is shared by All Home, the county, and the city of Seattle.

If not for the fabled Gold Rush that made Seattle the jump-off point for sailing to Alaska, it might still be a fishing village. Back then, population growth was a great thing, because it might bring to town the cabinetmaker who could fix your antique credenza, or the doctor who could cure your baldness, or the blushing young lady who would become the mother of your children. A city should be proud that people want to join it.

But things are different now. In recent years, Seattle’s population has exploded, and so has the number of unsheltered people, which is reckoned to have doubled since 2014. Critics have charged that Seattle makes abject poverty look so easy and attractive, people even come from out of state to be homeless and enjoy the amenities.

In reality, most new arrivals come (as in the Gold Ruch days) because they hear rumors of opportunity and success. Putnam says:

I talk with families from Arizona and Georgia… I don’t hear that, somehow, people in Atlanta know Seattle has a good soup kitchen, or something. When we asked, 5 percent — 50 out of 1,100 people — said they came here homeless and because of the services.

At the same time, there is undoubtedly a magnet effect within the county and even the state. Putnam says:

It seems obvious that if other cities provided comparable services, people in need of them would not flock to Seattle. If the availability were spread out, the clients would be more evenly distributed, rather than bunched up. This is the kind of dilemma that bureaucracies tend to go round’n’round with.

The accountants point out that economy of scale can be achieved by centralizing services. But people who come from far away to access those services are poor, so they don’t have any place to stay in the city. If they begged a ride from a friend — or took a bus — and ran out of money, they might be stuck without a way back to the small town they came from. The homeless statistics grow.

So, then it is decided that local branches for services are much preferable. Or an agency figures out a plan where a traveling social worker hits one town each day on a rotating schedule. Different jurisdictions handle things differently, as they should. The day inevitably comes when the financial pragmatists say, “Hey, this is costing a lot of money. Let’s put all the services in the big city, and make needy people go there.”

It is one of the eternal problems that every city has to deal with. Like all responsible policy-makers, Putnam and All Home would welcome more research, saying:

I’d be interested in seeing how recently all Seattle residents have come to this community, and where they came from, and what they were earning, and why they came…

There seems to be a particular lack of communication with people who live in cars and RVs, making up an estimated 40 percent of Seattle’s unsheltered folk. There is not much information about their needs, or what could be done to improve their situations. The city nudges agencies to concentrate on the people who live in tents. As far as Putnam knows, no agency applied to the city to do outreach to the vehicle dwellers.

Too many cooks spoil the broth

Putnam illustrated the old saying by mentioning a meeting where it would have been advantageous to be a homeless czar, because bringing in a bunch of people can make things cumbersome. Though the project was in the exploratory stage, 12 city and county officials felt they absolutely had to be there. The consulting firm they met with seemed baffled, and not totally pleased when such a mob showed up for a very preliminary talk, whose results could easily have been shared by sending out a memo.

In this case, the three-way sharing of authority worked well because of the personalities involved. But it could so easily have been different, and in many places, it is different. Which is why Putnam feels that the chain of command, rather than being relationship-based, needs to have clear-cut institutional parameters.

What would a different structure look like? He admires how the Seattle-King County Department of Public Health runs its show:

That department director is responsible for all things public health, and she reports to both the mayor and county executive… It’s not the solution to homelessness; it’s not going to solve everything. It would just put in place a structure that people will know who is accountable and will drive toward results, delegate and everyone knows who is making a decision.

The journalist asked, and Putnam answered:

And what is happening in society?

The spike on the charts is very similar to the spike in rents. It’s the same line… I don’t think it’s the only thing, but I think it’s the thing that pushes people over the edge, that rise in rent…

We’re being asked to end homelessness, which also has multiple, national factors at play that are really outside the control of one of the thousands of counties in the United States…

I think everyone at the local level has felt it is unfair for the federal government that isn’t doing its part to encourage mayors’ challenges, and local responses and local taxes, when there hasn’t been much movement beyond treading water with our federal funding for decades.