Of Plants and Potties 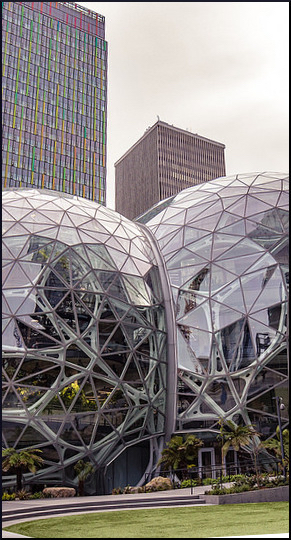 There is more to say about Amazon’s headhunting expedition in search of a city in which to establish its second headquarters (which is an oxymoron, but never mind that). No, the problem is that wherever HQ2 lands, it will create a housing shortage, and a housing shortage inevitably creates more homelessness.

Only a week ago, the headline at the National Association of Home Builders announced, “Housing Starts Fall 12.3 Percent As Tariffs Draw Increased Concern,” and the first sentence stated,

Total housing starts fell 12.3 percent in June to a seasonally adjusted annual rate of 1.17 million units, according to newly released data from the U.S. Department of Housing and Urban Development and the Commerce Department… Meanwhile, the multifamily sector — which includes apartment buildings and condos — dropped 19.8 percent to 315,000.

We have been warning the administration for months that the ongoing increases in lumber prices stemming from both the tariffs and profiteering this year are having a strong impact on builders’ ability to meet growing consumer demand.

Federal government policies have not only decreased the number of available construction workers, but have jacked up the cost of imported lumber. In only a few months, the higher price of wood added almost $9,000 to the cost of a new single-family house. The largest portion of this market is always single-family homes, which in and of itself does not do much toward housing the people who cannot afford to buy houses.

That quotation is from Steve Nicholas, of the Institute for Sustainable Communities, who for eight years was Seattle’s sustainability director. He goes on to say,

Skyrocketing prices are not only rendering Seattle housing out of reach for many but also exacerbating the challenge of homelessness: Seattle now has the country’s third-largest population of homeless people.

Among other recommendations, Nicholas urges the winning HQ2 city to prioritize the preservation and creation of affordable housing. No disrespect, but it doesn’t take a college degree or a white-collar job description to come up with such an excellent idea. Anyone who is being “moved along” from a street-corner or “swept” from an encampment of cardboard and plastic dwellings can nail that one. None of this bodes well for impoverished people in a state of bare survival.

Sometimes you have to wonder about the language that news is framed in. For instance, Jonathan O’Connell says of Seattle, “Amazon has contributed $30 billion to the local economy and as much as $55 billion more in spinoff benefits.” Doesn’t “contribute” mean something like “give” or “donate”? Because if we’re talking about payroll here, that’s not a gift.

It’s one party paying another party to perform labor, which is the way these things are usually done, and not especially laudable in itself. O’Connell goes on to quote the corporation’s real estate guy:

Next year, Amazon will complete its most prominent addition — three glass biospheres featuring about 40,000 plants, “a unique environment for employees to come and collaborate and innovate,” Schoettler said.

That’s all well and good for the 40,000 plants, but what about the estimated 12,000 people experiencing homelessness? And speaking of large numbers, the Amazon HQ has registered 4,000 employee-owned dogs. How many tons of dog poop does that constitute per week, and where does it wind up?

Meanwhile, how is the situation around restroom facilities for people who survive in public? Seattle.gov offers a helpful interactive hygiene services map denoting the city’s public restrooms, and showers and laundry services supplied by organizations for those who don’t have their own.

Why then, only a year ago, was Dyer Oxley moved to write,

People relieving themselves on sidewalks or in parks is commonplace… The King County Council recently had to convene a special panel just to discuss how bad the environment around the courthouse has become. A big part of that is people are defecating and urinating in the streets around the building.

Seattle should revisit the public bathrooms idea, and do it right this time. Assign personnel at the bathrooms to ward off illegal behavior and keep them clean. Don’t just set them and forget them. Public bathrooms are not just a means of diverting the public nuisance. Residents and tourists have bladders, too.

Meanwhile, Jeff Bezos, the CEO of Amazon, is unable to think of any more practical use for his excess billions than to start his own space program. But perhaps he is not entirely oblivious to these matters. Who knows, maybe the plan is to collect all the poop and send it to the asteroid belt.