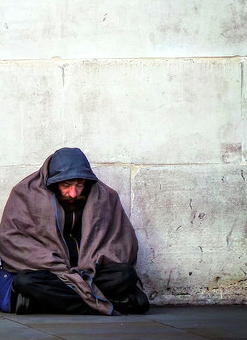 Richard R. Troxell, co-founder and President of House the Homeless, wrote an Amicus Brief having to do with fines levied on the homeless. In that document he cited a white paper that he also authored, using as one source the data gathered by the 2016 Traumatic Brain Injury Survey conducted by House the Homeless.

And then, there is Chronic Traumatic Encephalopathy or CTE, which cannot be diagnosed when a person is alive, only via autopsy. This means it can’t be treated, either. But anger, frustration, and confusion appear to indicate its presence. Richard says,

[T]he condition of TBI and CTE seems to be exceptionally high within the population of people experiencing homelessness. In fact, this may be one of the leading causes of health-related homelessness in America…

Antisocial behavior alienates others, whether on the street or off. A lot of people experiencing homelessness, including many of America’s military veterans, are not in full control of their actions.

Dr. Mark L. Gordon has worked with many victims of traumatic brain injury and found that TBI is a causative factor for accelerated hormonal deficiencies, which increase the risk of a number of medically documented conditions. These patients may be prone to “learning disabilities, depression, anger outbursts, anxiety, mood swings, memory loss, inability to concentrate…,” and other symptoms that jeopardize a person’s ability to keep a life on track.

Dr. Gordon has shown that restoring the patient’s neuro-steroids and neuro-active steroids to their pre-injury level can restore the necessary homeostasis, even years after the initial injury.

Finnish researchers studied people who had suffered a traumatic brain injury at age 65 or younger. They found that non-Alzheimers dementia risk was greater in patients who had experienced TBI than in the population as a whole. Perhaps not surprisingly, the more serious initial head injuries posed an even higher degree of risk.

The study showed that 3.5 percent of persons with moderate-to-severe TBI [were] diagnosed with a neurodegenerative disease later in life. This is substantially higher compared to age-matched peers with no history of brain injury.

Currently, it would be impossible to prove a direct cause-and-effect link between TBI and this type of dementia, but the usefulness of the knowledge is in minimizing other risk factors such as high cholesterol levels, diabetes, hypertension, tobacco use, and alcohol consumption. One difficulty is that a person with severe head trauma, a young soldier perhaps, could appear to be fully recovered, and even function adequately for decades, but still be in the demographic slice of people with an elevated risk of developing non-Alzheimers dementia.

One of the more familiar forms of teasing or ribbing that many Americans grew up with is the imputation of early head injury. If a person acts goofy or does something stupid, a friend might say, “Did you get dropped on your head when you were a baby?” Making that connection is a crude form of folk wisdom, probably originating from tribal elders with long memories. A person can experience TBI, seem to be okay for a big portion of life, and then turn up with dementia.

A lot of people who depend on shelters, or on no shelter at all, were punched in the head, struck with objects, violently shaken, damaged in car accidents, or even dropped on their heads as children. They seemingly recovered and went on to have normal lives, until at some point the past caught up, and things started to go haywire in the thinking department. For the healthy, housed citizen, it is an exercise in compassion to imagine an annoying, crazy-acting homeless person as a tiny, helpless baby, criminally abused by the grownups who were supposed to care.