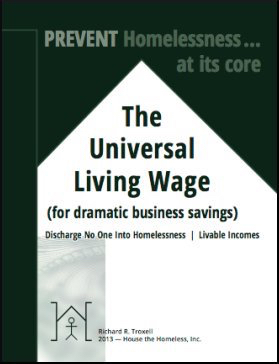 Richard R. Troxell, President of House the Homeless, Inc., is one of those people who almost has too much common sense. While everybody is frantic about jobs being outsourced, Richard asks us to think about what kinds of jobs can’t be outsourced. People who cut our hair and paint our nails. People who care for our aged relatives — and soon, for us.

Some things are destined to come back into style. As the world grows more conscious of waste and pollution, objects that last will be back in demand, and so will people who know how to repair them. The point is, jobs that people do with their bodies cannot be sent overseas, and Richard calls these workers “the backbone of American business.”

They can and will be treated better. If they ever realize their collective strength, things could get ugly for the folks who mainly love money. This is why unions are so widely discouraged, and why deceptive Orwellian phrases like “right to work” are formulated.

Another point Richard makes is that businesses need to stop treating workers like disposable plastic forks. For people who are so attuned to the nuances of the dollar, the things they don’t grasp are astonishing. Richard has studied the thoughts of Henry Ford, who may not have been the perfect man, but he knew a thing or two about running a factory.

Financially stable workers are good for business, and here’s why:

A fiscally responsible person does not budget more than a quarter of their income for housing — that’s what they used to teach in home economics classes. Then somebody sneakily raised the bar. Now, we are told, it’s wise not to spend more than one-third of the income on housing. And we’re supposed to feel all prudent and sensible, like before. But one-third is more than one-fourth.

In her article for House the Homeless, Katie McCaskey speaks of massive players and their extractive agendas, and specifically points to Wal-Mart as the archetypal corporate vampire, with “no incentive to care for local workers, their environment, or the economic resiliency of the local market to which they and other local business owners contribute.” And here she is on housing:

There was a time when the Federal Minimum Wage stabilized incomes enough that working people could afford housing. That time has passed, so definitively that workers are not only unable to become homeowners, they are not even able to pay rent. Apparently, the landlord class is untroubled by this. Their lawyers can figure out how to make the government reward them for sitting on empty properties.

Some HtH posts have introduced interesting individuals like Kirsten Anderberg, who called 300 apartment-for-rent ads in Los Angeles, and found that only three of those landlords accepted tenants who received assistance. For the mathematically challenged, that is one out a hundred, or one percent. Anderberg wrote,

[…] In essence, the government has made the Section 8 voucher program nearly impossible to use, while feigning the illusion of concern and remedy.

Don’t miss the interview that Wayne Hurlbert, host of Blog Business Success Radio, conducted with the House the Homeless co-founder Richard R. Troxell. On that day, Richard was wearing his writer hat, as author of Looking Up at the Bottom Line: The Struggle for the Living Wage.

The Home Coming statue to be unveiled at Austin’s Community First! Village on Saturday, May 18. This unique statue project has been in development for several years, the result of a collaboration between House the Homeless and sculptor Timothy P. Schmalz. The much-anticipated life-sized bronze statue will be introduced to the public at the Village’s community garden, details below.

There will be live music, and coffee and breakfast tacos will be served.