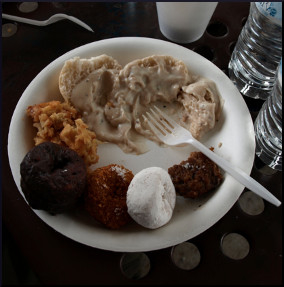 Yes, the title of this post is a sarcastic joke, because the increasing propensity of cities to criminalize homelessness is anything but fine. If it were not so deadly serious, the insanity of trying to wipe out poverty by punishing it with monetary penalties would be hilarious.

Just last month, in the Italian the town of Bordighera, the mayor demonstrated his understanding of how foolish it is to fine the homeless. Instead, he announced that anyone caught giving money to a beggar would be fined.

House the Homeless mentioned the fellow in the Canadian city of Montreal who owes the equivalent of $18,000 in homeless fees. The London borough of Hackney announced its intention to fine the homeless between (the British equivalent of) $142 and $1,420 for such offenses as sleeping outside and panhandling. More than 65,000 signed a petition objecting to the idea, and the Hackney Council backed off.

There are plenty of similarly grotesque examples in America, where the following incidents have happened in recent history.

In San Antonio, Texas, chef Joan Cheever, who owns a commercially licensed food truck, was warned that she could no longer deliver food to the homeless in her personal truck, which apparently is necessary because it is not practical to park the larger food truck in some locations. The bureaucracy decided that she could only hand out industrially packaged food from the smaller truck, rather than the nourishing gourmet meals that she cooked.

After receiving the first ticket that fined her $2,000, she continued to serve food in the accustomed way and told reporter Stefanie Tuder:

In a Florida town where a 90-year-old veteran and two ministers were feeding people experiencing homelessness, a new law was passed that would fine them up to $500 and possibly send them to jail, and the veteran was arrested twice in one week.

In Kansas City, Missouri, charitable organizations can run afoul of the law by providing food or other services within 500 feet of a park or within 1,000 feet of a school.

Aside from food providers, people determined to help in other ways are penalized. In Portland, Oregon, a property owner was fined for allowing an impromptu community called “Right 2 Dream Too” to exist on his empty lot.

In Temecula, California, the only full-time homeless shelter was told it had to close within a month, and Jeff Horseman reported that Project TOUCH already been fined more than $2,000 and faced further penalties of $1,000 a day.

In Madison, Wisconsin, a couple set up lockers on their front porch so people experiencing homelessness could store their belongings. Sometimes, people even slept on the porch.

The neighbors complained, and the generous couple were threatened with daily $300 fines. Scott Keyes reported:

People being threatened or assessed with fines for helping the homeless is becoming a trend recently. Earlier this year, a Florida couple was fined $746 for feeding homeless people, while a Birmingham pastor was prevented from doing so because he didn’t have a $500 permit. Even church groups based in St. Louis and Raleigh have been blocked and threatened with arrest for handing out meals to their homeless neighbors.

In McMinnville, Oregon, a church that started by serving coffee and snacks began letting people camp outside at night, and was threatened with fines for the violation of zoning ordinances. In this case, a compromise was reached: Tents would no longer be allowed, but people could stay overnight on the property in sleeping bags.