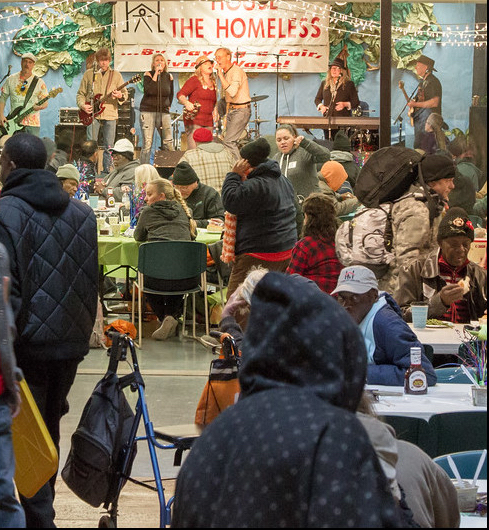 Last week, House the Homeless (HtH) brought up a vexed question: When the nation’s infrastructure is renovated, what will happen to the estimated 100,000 Americans who live beneath bridges and overpasses?

The topic is of major importance right now in Austin, where construction is underway and people are being evicted from whatever fragile, makeshift shelters they had. An estimated 200 people will be directly affected, or already have been.

Somehow, the Texas Department of Transportation (TxDOT) formed the mistaken impression that removing people from the planned construction sites would be the work of a moment. As HtH President Richard R. Troxell puts it, he and other advocates came to realize that TxDOT believed that “they could simply contact us and we would come get these people and house them.”

For housing to be supplied, it merely needs to be asked for — what a fanciful notion! If only it were so. This unwelcome introduction to reality slowed things down a bit.

Meanwhile, TxDOT understood that its representatives were being sent out to do what might be interpreted as barging in and invading the homes of people who live under bridges. To bring a gift would be polite, and they thought up a helpful one — a reflective bag that can be carried by hand, worn like a backpack, or attached to the person’s outer layer of clothing and baggage. They are given out by representatives of the state and the contractors, when telling people to move on.

The “Be Safe, Be Seen” bags are not empty: They were processed through volunteers from House the Homeless and Austin’s First Baptist Church, who included extras, as described by Richard:

In each bag, we placed a stamped survey asking each person if they knew how to enter the process to apply for housing so that when we get housing they will know how to access the system. Next, we put in a half page with the name of the First Baptist Church, its address, phone number and mission statement.

Then, we included two ways to contact me to apply for disability benefits. This can help the disabled (52 % by a previous HtH Survey) leverage housing. We also included a House the Homeless Plastic Resource Guide (it folds down into a pocket) so people can locate all homeless services in Austin.

Also included were copies of Richard’s recent op-ed column from the Austin American Statesman, with his recommendations on how to address the causes of homelessness generally. The volunteers also stuffed the bags with tangible and potentially life-saving items: rain poncho, thermal underwear, knit hat, socks, gloves, scarf, hand sanitizer, safety whistle, and pen.

Along with House the Homeless, First Baptist Church, and TxDOT, others who helped out with this “winterizing” project are: Eddie and Ritamay Mire, Jeff and Alyssa Korn, and Bruce Agnes —
Community First. Austin’s KVUE made a very nice television news story. All this was in addition to the nearly 500 people “winterized” at the Thermal Underwear Party, and please check out the beautiful photo album of this year’s event.

What next? Richard says:

House the Homeless is advocating that, in order for contractors to be able to meet the timeline of their contractual obligations, they tap into their contingency funds for each individual renovation project and create emergency transitional housing for our bridge dwellers while local communities get time to create appropriate housing.

As the nation moves toward this revamping of our infrastructure, the potential for a humanitarian crisis looms over the nation when as many as 100,000 people become subject to dislocation of their lives for a second time. If only there was someone with a national vision that could call upon all state Departments of Transportation to use those “Contingency Funds” all the contractors could meet their contractual deadlines and all these folks could be treated with dignity, fairness, and some transitional housing.

That’s a tall order, and meanwhile, there is a darker side to the upcoming relocation of humans. Formerly, city police have not been responsible to enforce anti-trespassing laws on TxDOT property. With permission from the City Council, that will probably change.

Meanwhile, advocates for the people experiencing homelessness are still objecting to three city ordinances concerning Class C misdemeanor offenses. Such an ordinary action as sitting in the wrong place can create a criminal history for a person who never had one before, and act as a barrier to that person to escaping homelessness, when they apply for housing or employment.

Source: “Commentary: How Austin could atone for policies that harm the homeless,” MyStatesman.com, 12/05/17
Source: “TxDOT, House the Homeless team up to provide warm items to those in need,” KVUE.com, 01/12/18
Image: House the Homeless