Resistance, Advocacy, and Ambivalence in Maspeth 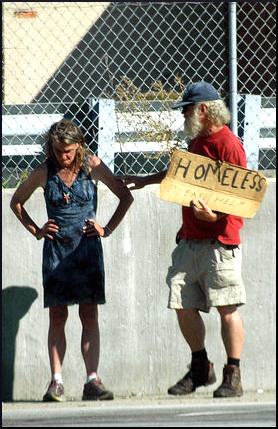 In Maspeth, which is part of Queens in New York City, a Holiday Inn became a homeless shelter. In April, some locals sued the mayor on technical grounds related to the building’s certificate of occupancy, but apparently an uneasy truce is now in effect.

But the permanent residents are vigilant. A woman filed a FOIA request (subsequently denied) for information on the shelter residents, particularly “employment information, last known addresses, reasons for their homelessness, drug use and length of stay.” In August, a headline read, “Cops say this couple has been breaking into Maspeth homes in broad daylight.” (Not the couple pictured on our page, by the way.)

According to the article on QNS.com:

Police have released images of a man and a woman responsible for a burglary pattern in Maspeth, hitting two homes within a span of three days in broad daylight…

In other words, the pair tried but failed to break into one house, and successfully broke into another and stole things, if that can be called a pattern. Obviously, some journalistic sensationalizing is in play, but, surprisingly, the local news sources are reticent about connecting crimes to the formerly homeless population. Strangely, a blog about local affairs never mentions the shelter at all.

A story from Gothamist is titled, “Ask A Native New Yorker: Is It Wrong To Hate Homeless People?” It quotes lively discussions between journalists, members of the affected community, and people who are neither. It illustrates, among other things, the proneness of trolls to deploy “straw man” arguments.

No one wants some 20 year old baby breeder and her litter of kids scrubbing off the good hardworking taxpayers.

However, the original Maspeth plan was to create a 110-bed shelter for adult families, defined as couples and families with children older than 18. Using rude and crude language, the same New Yorker voiced the frustrations felt by people who work hard to buy a piece of property with a house on it, and then find their communities playing host to people experiencing homelessness.

Nice middle-class neighborhoods are rare in the metropolis. They are populated by workers who “clean the streets, run the public transportation system, enforce the law, put out the fires, pick up the trash, teach our future and hold the doors open for the snobs who can’t be bothered.”

Critics say that people who live in shelters mess up their neighborhoods, and this is an understandable complaint. Parents whose kids play in the local park don’t want broken glass to suddenly start showing up. The obvious retort is that not all people experiencing homelessness are poorly socialized semi-barbarians who were raised in dumpsters with rats for pets.

The families in the shelter might have been traumatically transplanted from a nice middle-class community just like Maspeth. These days, almost no one in America is immune to the threat of homelessness.

A knee-jerk reaction would be to fence the park, limit the hours, convince the police to make a strong presence, or hire security guards. But it doesn’t have to be like that. What if community members went a bit out of their way for a while, and put in a little extra effort?

Local parents could spend more time at the park with their kids, getting healthy exercise and demonstrating by example how to treat a shared public space. Churches could create a welcoming atmosphere. A good-hearted intention to enfold newcomers, rather than repel them, could probably make a considerable difference in many instances.

Some kind of humane approach would certainly accomplish more good than the random pronouncement of blanket generalizations, like the following:

Gothamist publisher Jake Dobkin begs to differ, citing peaceful assimilation in several areas of NYC, both rich and poor. He suggests that what’s really going on is simple fear. Housed people live in terror of the prospect of homelessness, as well they should, because then they might be treated with the same scorn they pour on others now.

It’s much easier to believe that these people are sub-human trash, rather than just normal people who had the bad luck of being poor in an expensive city—because if you believed that, there’s nothing that could guarantee you’d never end up facing the same problem. Rather than pointing at the poor shelter residents, who are mainly the victims of bad luck and stratospherically-priced housing, you’d be better off directing your anger at the people who really have power in our city’s real estate market: the rich developers and the politicians whom they control.

It is characteristic of the NIMBY mindset to believe that homeless shelters should only be for people who were rendered homeless in that exact locale. The woman who petitioned the government for personal information was hung up on a 2014 statistic that claimed only four homeless families in Maspeth, and wanted to prove that most of the shelter residents came from other places.

That is an absurdly local perspective. Looked at on a larger scale, out of 12,000 families in the NYC “system” only 135 families (or less than 2%) are from places other than New York City.

The disgruntled “Maspeth Sympathizer” notes that homeless families tend to consist of women and children, with the fathers always missing. Deeper thought and more compassion would promote the understanding that often these families are homeless precisely because the father was taken from them — often by legal action.

It is no secret that minority-group males are accused, convicted, and incarcerated in numbers that do not line up with statistical probability. In city and county jails and state and federal prisons, the black and Hispanic inmate count is wildly disproportionate to the corresponding demographics of the population as a whole. And besides, people in places like Maspeth resent being called racist, when they are merely anti-homeless.