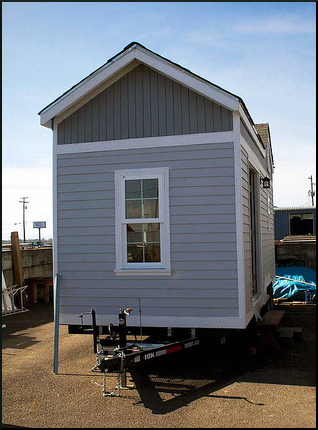 House the Homeless recently mentioned a very bare-bones type of individual housing unit, containing only bed, desk, and shelves, that costs $25,000 apiece. (Coincidentally, this is the same amount that American taxpayers shelled out for a “privacy booth” to be built inside the office of the head of the Environmental Protection Agency.) But if that sounds excessive, prepare for worse to come.

A British entrepreneur has come up the iKozie, a pod “designed to provide temporary accommodation for the homeless.” In this transitional scenario, the tenant will pay the rent and water bills and buy their own food, as training to become a fully functional member of society.

The pod contains a bedroom, full kitchen, bathroom “module,” and entertainment zone, all within 186 square feet. It is said to comply with planning and building regulations, “and has an A rating for energy efficiency.” A crane had to be rented to install the prototype in a volunteer’s backyard, which must add considerably to the tiny unit’s cost — close to $53,000 American.

Even that is an amazing deal, compared with Portland’s pods, whose cost is projected to be a jaw-dropping $75,000 each, paid for by public and private funds. (Wouldn’t a used RV set up on blocks be more economical?)

Each 200-square-foot pod will have a unique design… The pods will be able to house one adult and two children — inside, there will be a bed (some have bunk beds), shelves, a toilet, and a desk. They’ll all come with heat and full plumbing.

In Portland, some 200 homeowners have indicated preliminary willingness to host a pod in their backyard. The people who move in are meant to pay a certain amount of rent, while receiving the same social services as the city’s other sheltered homeless citizens.

This summer the program started with four families. Multnomah County is home to an estimated 4,000 unhoused people, so pricey mini-homes in backyards will not be the whole solution.

HGTV, which hosts a lot of tiny-house shows, defines a tiny house as anything up to 600 square feet. This is actually capacious, compared to similar products, being for example three times the size of the iKozie. Sadly, the production company seems coy about price information, and the general impression is that their designs are more for the wealthy retiree than the struggling former homeless person.

Is there a lower end to this spectrum? Yes. In the spring of 1915, an audacious experiment was underway in Wisconsin. After months of struggle, a group called Occupy Madison (OM) oversaw the building of three tiny houses by their prospective tenants. Even equipped with electric heaters, the structures only cost $4,000 apiece. A pre-existing commercial building holds bathrooms, a minimalist kitchen, dining room, workshop, and greenhouse.

The city considered allowing six more tiny houses to be built, if certain improvements were made. Apparently, bathrooms are the concern. Authorities often have a strange perspective on things. They tend to act as if, rather than live where several people share a bathroom, a human being is better off in the wild with no bathroom.

In this particular community, the homes are meant to be permanent, not transitional. OM is situated on private land and funded by private donations. One school of thought says the government should save tax dollars by encouraging this sort of project, but governments often find many reasons not to.

In Seattle, an organization built 14 tiny houses at a cost of about $2,200 apiece. Their size, 8×12 feet, or 76 square feet, is really minuscule, but each unit has insulation, electricity, and heat. Toilets and showers are in a central building. These are meant to be temporary places to regroup while attempting to make more permanent arrangements, and residents pay $90 a month toward the utility bills.

Maybe the federal housing authorities could encourage cities to be more inventive and adventurous about creating housing for people with very low incomes. The problem is not a shortage of know-how. Every day, some college student wins an award for designing an inexpensive small dwelling with basic amenities.

The problem is, very few settled people are willing to have a tiny-house village anywhere near them. Or a single tiny house in a neighbor’s backyard. Or in their own backyard. And often, even if the property owners who are directly concerned, and their neighbors, are on board, the housed people from other parts of the city will feel threatened, and throw a monkey wrench into the machinery.