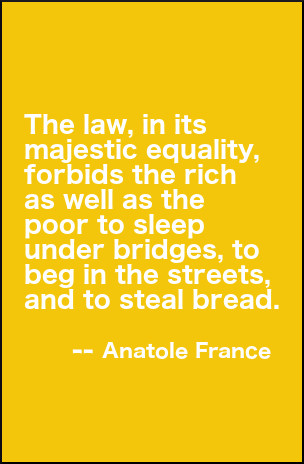 In 2014, a California town of Manteca announced its intention to outlaw virtually everything that a person experiencing homelessness could possibly need or do. An ordinance was put in place to forbid the removal of shopping carts from stores, and, granted, that is theft.

On the other hand, good, housed citizens don’t all have cars, and in some places it’s accepted for a regular customer to walk a cart home and bring it back next time. Quite possibly, elderly and low-income housed people in Manteca have suffered from the necessity for this rule.

But when ordinances are voted on, one of the selling points is that they are fair, and apply to everyone. For instance, it is just as illegal for a housed resident or a homeless person to lie down on a table in a park. They are equal under the law.

They are not equal in circumstance. A local resident who visits the downtown area and doesn’t feel well, or suddenly needs a nap, can probably duck into a business establishment or a friend’s house, or be taken home quickly. A homeless person who feels ill or suffers from sleep deprivation is out of luck.

The Manteca homeless are vigorously discouraged from hanging around the library, where they are said to intimidate the patrons. Police Chief Nick Obligacion gave quotes to the press:

My officers understand that this (the homeless in Library Park) is a big issue with me.

My goal is to make it as inconvenient for them as possible.

If we arrest them and drive them to French Camp (the county jail) enough, sooner or later they will get tired of walking all the way back to Manteca…

Of course this pavement-therapy tactic is not unique to the town, or even the state. It’s the sort of life-hack tip that law enforcement officers all over the country enjoy sharing via their professional websites. Police can do a lot of things to penalize homelessness.

In Manteca, sleeping outside or “camping” was made illegal on both public and private property, which leaves no slack. It seems strange that homeowners would acquiesce to such a rule, which would include kids in tents, in their own backyards.

Of course, an non-discriminatory ordinance that applies equally to peasant or king banned public urination and defecation. City workers started locking whatever public restrooms existed (which, again, is probably inconvenient for the housed locals, but higher principles are at stake here). On the plus side, Chief Obligacion assured journalist Dennis Wyatt that officers are careful not to violate the rights of the homeless, because…

We don’t want to create expensive litigation for the city.

That is, for the locals, perhaps enough of a benefit to compensate for the loss of courtesy grocery cart loans and even public restrooms. However, such reticence was too late to help a parole violator who was shot 13 times (fatally) by a Manteca officer back in 2011. In April of 2014 a settlement was arrived at, in which the city agreed to pay the deceased man’s family $2.2 million. The new, stricter anti-homeless ordinances were proposed the following month.

Also in May, a police officer rousted a sleeping homeless veteran named Robert Olvera, inflicting serious injuries, and the whole story sounds pretty sketchy. Olvera is also suing the city, with a trial set for next April. That’s right, this matter will not come to court until 2017, and a lot of things can happen to a homeless plaintiff between now and then.

In November of 2015, four homeless men sued the city for civil rights violations. All the plaintiffs have received citations for camping, and claim that the ordinances target homeless people. Robert Schuknecht says he has lived in Manteca for more than 30 years, including residence in an SUV which the police towed away in 1995 because he was trying to feed other homeless people.

In May of this year, the local news published an uncredited article titled “Conceding Manteca to the homeless?” which characterizes the people experiencing homelessness as brazen and bold, with an “in-your-face-I-can-do-whatever-I-please” attitude. By expressing gratitude that pedophiles, gang members and drug dealers have not yet sued the city for civil rights violations, the writer indirectly yet unmistakably equates homeless people with those groups.