When Homelessness Is Criminalized 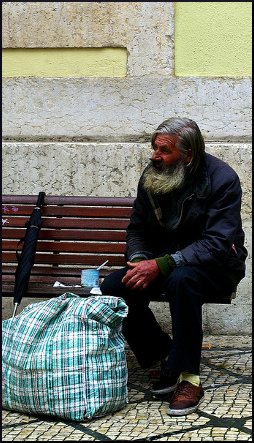 In communities all over the country, police are strongly incentivized — by federal grant conditions and local budgetary constraints alike — to make arrests and issue fines as frequently as possible.

After such a truth-bomb of a first sentence, all the rest is just details — the kinds of details that pile up relentlessly, day after day, in some parts of the country, until an outlaw life looks better than nothing. But, too often, young people are implicated in crimes they never put an ounce of intention or awareness into. A person can wind up in prison for loaning their car to a friend.

The poor are systematically hit with fines and penalties that make their survival even more precarious. In 2013, in Ferguson, Missouri, the courts “released more arrest warrants than there were people.”

The notorious, enormously protested 2015 death of Sandra Bland in Prairie View, Texas, was found to be part of a similar scheme. States with no personal income tax, of which Texas is one, are particularly vulnerable to piracy in uniform.

It is all part of a system that, as Slaughter-Johnson says, “creates poverty with one hand while violently punishing it with the other.” She relates the appalling story of Alton Sterling, a homeless man killed by police in Baton Rouge, LA. People experiencing homelessness are hit hardest of all, especially in neighborhoods that are mostly African-American. The much-touted solution of mass incarceration has solved nothing.

Remember when Sarasota, Florida, arrested Darren Kersey for charging his cell phone in a public picnic shelter in a city park? This led to a night in jail, a charge of Utilities Theft, and a $500 bail bond. It costs about 25¢ per year to charge a cell phone, so that seems a bit extreme. The likelihood that a person experiencing homelessness could post bail, or pay any fine, was vanishingly small.

In 2015, there was a similar cell-phone case in Portland, Oregon, generally perceived as a liberal and left-leaning town. A man and a woman (who identified herself as “Jackie”), both experiencing homelessness, were accused of third-degree theft for charging their phones from “an outlet on a sidewalk planter box in Old Town.”

This is the type of outlet that powers the extravagant holiday light displays in cities across America, spending a chunk of taxpayers’ money for decorations for people to enjoy. Why a city would begrudge homeless people the fraction of a cent’s worth of electricity needed to charge a phone is a mystery indeed.

Reporter Emily Green mentioned the foolishness of wasting public resources on such a trifling “offense” especially when, as in this case, the time and energy of four uniformed officers are utilized. She also pointed out the serious consequences that could accrue:

Jackie has never been convicted of a crime. If this charge led to a conviction, it would mean the difference between checking “no” or “yes” to questions about criminal history on a job or housing application.

Jackie’s case was destined for Community Court, but when TechDirt.com followed up the story, reporting that the accused had lost the citation and consequently missed her court date. She turned herself in and was jailed.

The following month, Alternet.org reported that Jackie had refused a plea bargain because of the damage it could do to her future chances of housing and employment, and said that “eventually, the theft charge was dropped.”

Let’s get back to the fate of Florida’s accused electricity thief, Darren Kersey. A sane judge threw the case out. The ACLU’s Michael Barfield told the press:

We have been monitoring the efforts to root the homeless out of the parks, and have several actions planned against the city. So much happens on a daily basis, it’s hard to keep up with it. Every day there’s something new.

Barfield is a former jailhouse lawyer who, because of his criminal record, is not permitted to become an attorney. The law allows him to practice as a paralegal, which he does enthusiastically, defending so many unpopular causes that surely a movie will be made about his life some day. In the whole country, he is one of the more flamboyant public figures involved with homeless issues. As a not-quite lawyer, he is in a position similar to that of many not-quite-reporters.

The great news-gatherers and news-dispensers of the past and present deserve infinite respect. Still, there has probably never been a time when citizen journalism flourished more ornately or more effectively. The general public may never hear of the contributions made to justice by their fellow Americans whose energy is directed according to Motivation 3.0, the formulation articulated by Daniel Pink as a combination of autonomy, purpose, and mastery.

Few people will ever know how much any story was enriched by amateur sleuthing and bureaucrat-bothering, contributed by ordinary folks who aspire to be the difference they want to see in the world.