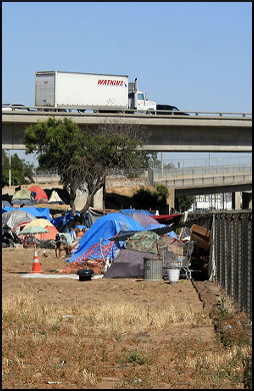 Difficult as it often is to believe, the Fourth Amendment to the U.S. Constitution has not yet been annulled and is still in effect. It goes like this:

The right of the people to be secure in their persons, houses, papers, and effects, against unreasonable searches and seizures, shall not be violated…

Some professionals make entires careers out of debating such questions as whether this only applies to people who have houses. In the street (or as we now say, on the ground, as if America were a vast battlefield), people experiencing homelessness may technically be protected by the law, but have few de facto rights. The term “property” itself is more often used with reference to real estate, and who does or does not have a right to be present within borders of that territory.

Much less often does anyone contemplate the meaning of “property” when it applies to the personal belongings of people who only have what they can carry. Yet authorities relish the chance to confiscate and destroy these possessions.

Some cities have a policy that seized possessions must be stored for a certain amount of time, but it rarely happens. Often, the stolen items are very difficult or impossible to replace.

Enterprising reporters find the individual tales of victimization, and each one describes things that just shouldn’t be happening in America. For Mother Jones, Laura Smith collected such stories from around the country.

A Los Angeles woman whose tent and blanket were seized contracted pneumonia, was hospitalized, and sued the city. In Denver, police were told not to take bedding and camping gear during the cold months, but when April 1 rolled around, it was open season again. Seattle has been the scene of much contention because when “sweeps” are planned people are not given proper notice and their personal property is not respected.

In San Francisco, the storage rules are ignored and the California Department of Transportation has been sued for stealing tents, bedding, stoves, and other items. It is even tough to survive in Honolulu. Smith writes:

In a survey of homeless residents by the Department of Urban Planning at the University of Hawaii-Manoa, nearly 60 percent reported losing personal identification, 40 percent lost tents, and 21 percent lost medicine in sweeps.

Any housed citizen who has ever lost a wallet or purse, or experienced a burglary or fire, knows what a hassle it is to replace documents. For a person experiencing homelessness, without a phone, address, or checking account, the loss of ID is catastrophic.

Smith spoke with Maria Foscarinis, executive director of the National Law Center on Homelessness and Poverty, and learned that seizure and destruction of personal property happens all over the country. Smith writes:

Belongings are often seized under anti-camping laws or laws that prohibit sleeping in public — part of a larger trend of what Foscarinis calls “the criminalization of homelessness.” Earlier this year, her organization released a study tracking the phenomenon in 187 cities.

In Reno, Nevada, the local shelters were full, and Robert Wynters lived under a bridge. He carefully stashed his few extra clothes, hygiene supplies, personal papers, and bicycle to go out and look for work, and returned to find everything gone. This happened not once, but three times in a six-month period.

In each case, inquiries at the sheriff’s office the very next day were futile, because each time he was told that his property had been destroyed. In April of 2015, he filed a civil rights lawsuit against the sheriff’s department.

In July, the Washoe County Board of Commissioners approved a $14,000 settlement for Wynters and his attorney, and resolved to adopt some better procedures for the removal and storage of personal property from campsites. Every now and then, somebody wins.

With the help of organizations or lawyers willing to do pro bono work, once in a while a plaintiff is heard and compensated. Of course in these cases, society loses, because the monetary awards are paid for by the taxpayers, who would probably much prefer that good practices had been in effect sooner.