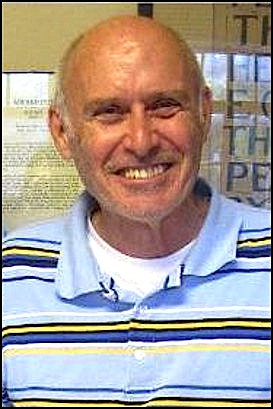 This month of May 2017 began with a much-grieved death on its very first day. Michael Stoops was a legendary figure in the world of anti-homelessness activism and a person of extraordinary commitment.

Megan Hustings, Director of the National Coalition for the Homeless (NCH), wrote:

There will never be anyone like Michael, with his dedication to others, his tenacity, his quiet leadership and quirky humor. We all loved Michael as a mentor, a colleague, a brother and a friend.

A Quaker and a product of the fabled 1960s era, Stoops went to Portland, Oregon, to begin using his B.A. in social work to serve others. In the course of working with Vietnam veterans, he became known as a compelling speaker and an inspiring fundraiser. In 1986-87, he participated in a five-month winter campout protest with Mitch Snyder in Washington, D.C., credited with swaying sentiment toward the passing of the Stewart B. McKinney Homeless Assistance Act.

When the National Coalition for the Homeless began, Stoops was one of the board of directors’ founding members. In 1988 he joined the NCH staff, and in 2004 became Acting Director.

He also sat on the board of Street Sense, a street newspaper in Washington, D.C., and was a founding member of the North American Street Newspaper Association. He was called upon to give expert testimony to state and local legislatures trying to alleviate homelessness.

Hustings describes his special talent for seeing the potential in others, and calls him “the rock of NCH,” and even a super hero. She goes on to say:

He made time for each and every student doing research, for every mother crying because she couldn’t find shelter for her family, for every filmmaker wanting to make a difference, for each traveler who happened upon our office looking for help, and for every advocate looking for a way to fight for change.

Stoops recognized the vital importance of inclusiveness and of grassroots recruitment, and his skills as an organizer had the spark of genius. He taught thousands of people how to be troublemakers in the best possible sense of the word.

Michael developed the “You Don’t Need a Home to Vote Campaign” that won state legislative changes nationwide to ensure that people without a residence could legally vote in elections. And he established NCH’s Speakers Bureau, which provides people experiencing homelessness a platform to share their stories and receive speaking fees while raising public awareness about homelessness.

In 1997, NCH recognized House the Homeless President Richard R. Troxell with an award. He joined the Board of Directors and has worked with Michael Stoops on the Civil Rights Committee since then.

We have mentioned Richard’s book, Looking Up at the Bottom Line, which includes (on page 85) the narrative of how Stoops took on the producers and peddlers of the disgustingly exploitative “Bum Fights” videos. When putting together the first Bridge Action in 2005, Richard looked to his friend for ideas, also described in the book. The NLIHC calls him a giant.

His final days, spent at Washington Adventist Hospital, were full of visits from friends who read to him and played music. In an email to concerned friends everywhere, Julieanne Turner wrote:

Michael’s entire life is about standing in solidarity with people who are poor, their voice, based on their needs. There is something so holy about this. Although, Michael conducted himself with humility, never took up too much personal space on this earth, his foot print is huge.

The Memorial for Michael Stoops will be held in Washington, D.C., on Thursday, May 25, at the Church of the Pilgrims, at noon. Anyone who wants to acknowledge the good done by this exceptional person is asked to donate to the National Coalition for the Homeless.