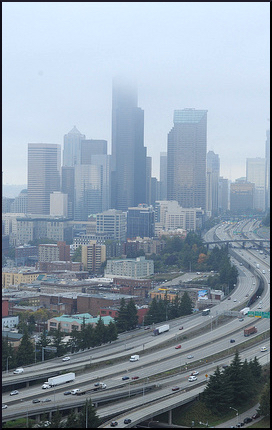 Astonishingly, there is still more to say about how Seattle has fared under the auspices of Amazon, in a situation that is rife with object lessons for other American cities tempted to court the favor of giant corporations.

For instance, journalist April Glaser wrote about a particularly awkward situation in which the people and institutions of Seattle might appear to be ungrateful for the largesse from on high. Amazon owned a former motel, which in 2016 it allowed to be used as a temporary shelter. When construction started there, the shelter was moved to another former motel, where it currently has temporary quarters. (A new 200-bed facility is supposed to be available in a new Amazon building starting in 2020, which is of course still two years away.)

In both the temporary shelters so far, there have been reports of residents, including families, being locked out “sometimes overnight and for extended periods of time.” It was not intentional, but apparently a problem with the doors, and there was confusion over who is supposed to fix the doors. As the old saying goes, the Devil is in the details. Not to put too fine a point on it, it does seem reasonable to expect that the gift of a place to stay ought to be paired with a capability to enter the premises.

The temporary shelter is run by Mary’s Place, to which Amazon also donates a large amount of free food that is left over every day from its downtown store. The people served by the charity have of course benefited greatly, but Mary’s Place has also “tolerated major logistical nuisances to the detriment of its staff and clients.” With inadequate resources and incomplete information, they are expected to manage the redistribution of extra food to other area shelters.

Food comes with an expiration date, and the staff has to sort through it all and dispose of what was already outdated — a task that requires considerable time, space, and human labor. Then, the food that has been deemed safe has to be stored appropriately. And the garbage has to go — which means it needs dumpsters to be stored in until pickup, and a paid service to take it away.

In June, things transpired that to some eyes looked very much like skulduggery. Seattle wanted to do the right thing and make some moves toward reducing the level of homelessness and building more affordable housing. The solution was to impose a tax for each employee of businesses making more than $20 million per year, which would impact Amazon too heavily (in Amazon’s eyes, anyway.)

In response, the mega-corp threatened to cancel a major office construction project, and mounted a “vicious” campaign that sought to not only repeal the tax but, in the words of journalist Alana Semuels, “to flush progressives from office.” So a couple of weeks later, the City Council saved Amazon the trouble by repealing the tax on its own.

In a complicated, drawn-out standoff filled with quid-pro-quo offers made and rejected, Amazon and the other biggest companies are described as “holding the city hostage” over the housing issue. No doubt plenty of discussions have been held in the fabled “smoke-filled room” atmosphere, even if the actual smoking has been relinquished. It gives the impression that other businesses are fed up with paying for the brunt of the damage that Amazon’s presence has done to the city. They seem to be saying, “It’s not us, it’s THEM.”

On the contrary, other huge local businesses (and smaller ones too) have shown goodwill. In August the members of the legendary group Pearl Jam stepped up to perform two home shows, with millions in profits going to organizations that deal with housing and homelessness.

The band, along with other members of the community, committed to matching donations (up to $960,000) to a new fundraising campaign called the Home Fund. Meanwhile, it also lured local companies, including Starbucks, Nordstrom, and the Seattle Mariners, to contribute to the effort…

Perhaps in effort to redeem himself, Amazon boss Jeff Bezos announced that he would donate $2 billion (tax-deductible, for him) to alleviate hunger and homelessness on the West Coast. But some people are not impressed by all the words. Some say that the richest man on earth should put his money where his mouth is, and just simply pay all his employees enough to live on without their having to apply for government aid.

Some critics accuse him of “crimes against humanity” — and they do not forgive easily. A Guardian columnist Marina Hyde points out that Bezos already had a chance to show off his world-building skills, with Seattle, and unequivocally blew it. She calls him a sociopath in her opinion piece in The Guardian and goes on to say of him and his all-too-numerous ilk,

The rule you learn on Day One of being a billionaire philanthropist is that you don’t give money via pay packets to the poor people who literally already work for you. They’d only spend it poorly. However, if they want to humbly queue up and apply for it via some thinly disguised hardship grant that you take the applause for, that’s a different matter. Dignity is something you hand out, not something that others get to earn.