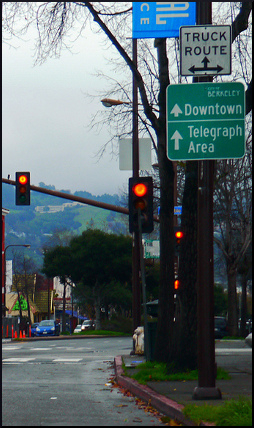 Back in the 1960s, Berkeley, California, was the epicenter of the Free Speech Movement, and of vehement objection to the Vietnam war, as well as a mecca for women’s rights activism. The city’s radicals were always marching against things and occupying places, not to mention educating the public at every turn. Causes like People’s Park kept the atmosphere electric for decades.

Recently, Berkeley is having a resurgence of political ferment. (For interested observers in other parts of the country, local participants report on the ongoing hour-by-hour drama of the Berkeley street scene via a Facebook group called “First they came for the homeless.”)

As in so many other American cities, the cost of housing is simply out of reach for a large segment of the population. Homeless activist Mike Lee is running for mayor, on the platform of mutual aid and voluntary cooperation.

Many people experiencing homelessness also want to experience the democratic process, by voting, but they are often unable to. The fact that this is an election year adds greatly to the overall stress, and much energy has been put into voter registration efforts.

For Truthout, David Bacon has written a massive report covering these and other Berkeley issues. He recounts how, in October, a homeless community that had been camping on a grassy medium in the middle of a road were forcibly relocated, and not for the first time. The way the authorities habitually accomplish this is to roll up at 5:00 AM with a contingent of city vehicles, flanked by several police cars. Customarily, they fill their trucks with seized tents, bedrolls and other belongings.

On this particular occasion, some residents had the opportunity to send text messages to allies. The journalist quotes Mike Zint, one of the group’s leaders:

We went into delaying tactics while we got community support mobilized. That doesn’t stop them, but every time this happens we get more support. So they sat there in their trucks for the next six hours — a dozen city workers and a code compliance officer, all on overtime. They took seven cops off patrol. And in the end, after all the arguments, we only moved about 200 feet, across the street. And how much did that cost?

The politically motivated group demonstrates outside Impact HUB, where homeless services are centralized. Their intention is to force public debate and defend rights. One bone of contention is the shabby treatment doled out to the most vulnerable members of the community. From Dan McMullan, of the Disabled People Outside Project, the reporter learned how a wheelchair-bound woman was repeatedly denied help because she “didn’t fit the intake criteria.” How much worse off than homeless in a wheelchair does a person have to be?

This bunch is made up not of random rough sleepers, but of politically savvy people who have formed an intentional community. Bacon quotes Zint’s description of what has come to be known as the Poor Tour:

It’s a mobile occupation that can pop up anywhere. We’re exposing the fact that there is no solution — nothing but exposure for the homeless. And exposure is killing a lot of people.

One such casualty of the War on the Homeless was Roberto Benitas, who in late September was found dead in the doorway where he slept. McMullan, who writes for the newspaper Street Spirit, recruited a city council candidate to help organize a memorial. For additional commentary about that sad event, House the Homeless contacted Dan McMullan, who said:

I was touched the way the community came together to remember this man who went unnoticed amongst us for so long. Even in death it took a while for anyone to notice. A year ago there wouldn’t have been such a cross section of the community. Housing is on everyone’s mind and the wolf is heard in all quarters. Not one but two Native Americans showed up independently to play the flute. The spirit was strong and we all were together… [M]oved together… I went out and put together a protest… My own years of homelessness haunted my every thought and I had to placate the many ghosts that cry out in the bad weather. Do something… [A]nything.

Source: “‘We’re Homeless and We Vote’: Homeless People Want a Voice in This Election,” Truth-out.org, 10/28/16
Photo credit: Mic V. via Visualhunt/CC BY