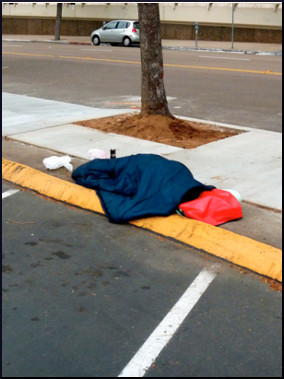 An essay that Dan Arel wrote for Counterpunch about the current goings-on in San Diego is vital because it concerns two topics that have been extensively covered by House the Homeless: the Housing First concept and “sweeps.”

Arel speaks of the violent El Nino weather patterns that afflicted Southern California early last month, just when “community frustration” about the large number of people experiencing homelessness was rising. The only answer the mayor’s office could come up with was to order a “cleanup,” as if poverty-stricken, unhoused people are dirt that needs to be swept away.

Many police officers took part in the tearing down of shelters and the relegation of people’s possessions to garbage trucks. Arel writes:

To make matters worse, the officers timed their action when many of the homeless in the area had gone inside to access restrooms at the Neil Good Day Center. When the homeless citizens went inside, police deemed their property abandoned and collected it all.

Aside from everything else, the reporter was told by activist Michael McConnell that the response rate of the police department to actual crimes is far from admirable, and to have police personnel throwing away blankets and tents is a terrible waste of public funds. Caltrans also keeps its workers busy with “a crew out almost every day cleaning out downtown area camps.” Supposedly, the homeless are given three-days notice to move elsewhere, which is a cruel joke when there is no other place to go.

As always, the city cites sanitation and hygiene concerns. As always, decent people wonder why there can’t be public restrooms and even places for washing up and doing laundry. The society we live in has ambitions to build colonies on other planets, yet can’t figure out how to provide sanitation and hygiene in a modern, advance city here on Earth.

In addition to “sweep” and “cleanup,” civic authorities also use the term “purge” which has even worse connotations. A purge is the abrupt or violent removal of people from an organization or place. The word has many synonyms, including expulsion, ejection, exclusion, eviction, and eradication. Purges were and are engaged in by conscienceless tyrants in banana republics, Iron Curtain countries, and places ruled by medieval-minded warlords.

Somewhere around 9,000 homeless people live in San Diego, and a lot of them lost vital medications, personal papers and documents, irreplaceable belongings, sleeping bags, spare clothes, and more in this effort to clean up the city. The local activists, when they show up at protests and meetings, wear trash bags to convey the message, “Stop treating human beings like garbage.”

Roughly one-third of the unsheltered homeless have a physical disability, and one-fifth suffer from severe mental illness. These men and women need more help than is available and what they receive instead is harassment by law enforcement and the city government… Throwing away possessions and destroying homeless camps does not solve the crisis facing the city… With mentally ill and elderly people lining our streets, San Diego must do better.

Allegedly, “tens of millions of dollars” are available to help people pay rent under the Section 8 program, but as in so many other places, landlords refuse to take Section 8 tenants. Obviously some other solution is needed, and needed now.

One of the most disturbing paragraphs in this deeply disturbing story concerns the reporter’s assessment of the Housing First paradigm as a failure — at least in San Diego:

The solution, which looks fantastic on paper, gives these men, women, and families a stable living situation and allows them to rebuild their lives and even reenter the workforce. However, this plan has never been successful and instead of rethinking the strategy, it seems that city officials have just thrown their arms up in frustration… Using landlords as a scapegoat for inaction accomplishes nothing…

Who should be the scapegoats? The municipal administrators who allegedly are smart enough to run things, but who can’t figure this stuff out — not just in San Diego, but everywhere in America.

It’s funny how, whenever a city wants to build a dog park or a racetrack or a sports arena, funding is available and obstacles magically melt away. But when it comes to creating places for people to live under roofs with electricity and running water, it’s like this enormous puzzle that none of these college-educated, highly-paid bureaucrats can wrap their heads around.

Housing? For humans? The clever, suit-wearing winners are at a complete loss. Imagining how to get people in out of the weather is an insurmountable challenge.