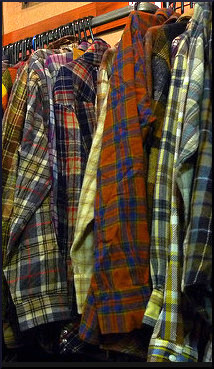 These reports, both current and further back in time, are about the efforts made to collect and redistribute clothing, which is, after all, one of the top three essential human needs. For those who have no choice but to survive in public, constantly witnessed and judged, the ability to replace clothing is vitally important. They are always at risk of having their belongings stolen, either by people even more desperate, or by representatives of the law.

For a whole separate set of reasons, socks are very much needed. Know who could use a bunch of socks, right about now? House the Homeless. In Austin, on January 1 (New Year’s Day), the annual HUGSS (hats, underwear, gloves,  scarves, and socks) for the Homeless event will take place once again. It is not too late to sign up and do something to help 500 fellow Texans.

Also in Austin, the Clothes Closet for Homeless Men was established in 1999, with the rule, “If we wouldn’t wear it we don’t hand it out.” The facility didn’t even have a permanent space. On designated days, tables and racks would be moved from a storage area to the conference room of the Central Presbyterian Church.

The location offered not only clothes, but shoes, belts, hygiene items and Bibles. In April of 2015, there was a party with cake and other refreshments as the Closet served customer #20,000. Best of all, it’s still going today, open on Mondays for eligible folks who first sign up at the Austin Resource Center for the Homeless (ARCH).

Think something, do something

Stanley Tomchin made a pile of money in the gaming industry, and over the years his philanthropic attention has turned to several areas of human need. In 2014 he asked friends on the California coast, where he had one home, to donate their gently used clothing to people in Las Vegas, where he another of his residences was located. In explaining the need, he said,

Friends tell me they’ve never seen so many needy families in stressful situations in more than twenty years. Whole families “work” the parking lots at malls asking for $1 to feed their children.

In Iowa, a businessman decided to collect used coats, snow pants, gloves, hats, scarves and blankets, and then to dry-clean all the items (fortunately, dry-cleaning was his business) and donate them to the Dubuque Rescue Mission to either distribute, or offer in its thrift shop. (A dry-cleaner would have a head start on donating items, because inevitably in that line of work, some things are never picked up, no matter how hard the business owner tries to make contact. After a legally established period of abandonment, they are up for grabs.)

Mike Hagar did more than just receive, collect, or transport the donated cold weather gear. Adding an extra dollop of class to the operation, he also cleaned and pressed used business outfits, of which shelter residents got first pick, for job interviews. (This may sound unfair, but it illustrates one of the many nuances involved in serving these populations, where membership, however temporary, may not include a place to keep a good shirt. A shelter resident is likely to have at least a nail on the wall to hang things from.)

What is a rent-free, premises-free, pop-up clothing store? Just what it sounds like, otherwise known as the Street Store. Anyone can make this happen, and people have been doing so all over the world. Mark DeNicola muses on the mental blocks that stand between us and the extraordinary altruistic achievements of which we dream:

The most common hiccup holding us back from doing it, is an uncertainty towards how exactly we can do this — we often feel as though we lack the tools or skills necessary to be a part of what we are passionate about.

What’s great about The Street Store is that it has created the tools for you. Tools that are so easy to follow and use that over 40 groups have already put them into practice in major cities such as: Manchester, Vancouver, Oslo, New Jersey and Las Vegas.