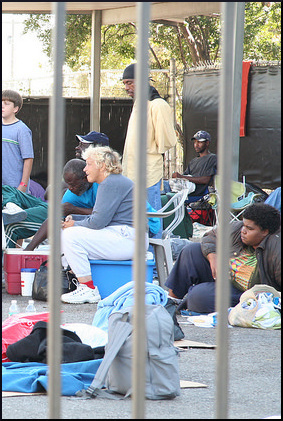 The beginning of the year is a wonderful time to ponder the question, “What can I do?” Here are some inspirational stories of things that real people have done, can do, and are doing — specifically, about hunger.

As the federal government subtracts from the funding that feeds Americans, individuals find ways to help. One of the more spectacular stories is that of Angelo Sarkees of Lewiston, NY, who told a reporter,

Sarkees, who has now entered his 70s, retired from his state’s Department of Environmental Conservation, so a certain mindset about controlling waste was already in place. Combining this with the intention to feed people, he decided to raise money through recycling. He started by picking up after a jazz festival, then branched out to other big public events, which supply a bountiful harvest of recyclable drink containers.

Sarkees recruited many local restaurants and other businesses, as well as office complexes, to synch up their recycling efforts with his Deposits 4 Food project. He would let people drop off empty cans and other debris at his house, or even pick up items from their homes.

A company called Porter Empty Return gives him 10% over what other recyclers receive, and owner Doug Adamson told the press,

Sarkees figures that most days, he devotes two hours a day to the work. Three years ago, he told WIBV,

An update this December confirmed that, at the five-year mark, he has surpassed the smaller goal, having raised $65,000 so far for three local food pantries. This amounts to about 600,000 cans and bottles, and 100 tons of scrap metal.

A plethora of possibilities

One never knows when an opportunity will materialize. In Little Rock, AR, there was an under-bridge location where hungry people could meet up with church groups and other organizations who brought food. Then, the area was closed for highway construction. This was a problem for a while, until attorney Gary Holt volunteered the parking lot of his downtown office.

He also set up the communication system for the people with food to organize their schedule. Local media obtained this quotation from Holt:

In Fort Lauderdale, FL, Gloria Lewis and Anthony Vargas bring home $700 worth of groceries every week to their two-stove, four-refrigerator kitchen. With the help of their son Ivin, they prepare 225 dinners and 180 breakfasts in individual serving boxes.

When they started six years ago with 20 meals per week, they bought the food themselves, but then local businessman Bob Byers stepped in with substantial cash donations that have enabled the increase. Ms. Lewis says,

I have always worked in low-income jobs and I could see just how easy it is to become homeless… The worst thing about homelessness is that even when you get off the street, it’s so easy to end up back there… There’s such a stigma about homeless people but they are a group of people that are so helpful to one another and so supportive… The stereotypes that surround the homeless are so far from the truth. I see myself every day in these people and I think it could be me so easily, so I go and feed them…

Since 2015, the Fargo, ND, franchise pizza shop owned by Jenny and Mike Stevens has given away close to 150,000 slices of pizza (approximately $70,000 worth) to three homeless shelters and anybody who drops into the store and asks. This is partly financed by paying customers who drop dollars and loose chance into a donation box.

The family also recently started crowdfunding their efforts online. A sign in the window says,

To the person going through our trash for their next meal, You’re a human being and worth more than a meal from a dumpster. Please come in during operating hours for a couple of slices of hot pizza and a cup of water at no charge. No questions asked.

I want to say, “Hey listen, corporate people and people in politics! Listen to me!” I want to show them what love can do, and I want to spread a wave of love that touches the lives of millions.