Have a Respectful Halloween 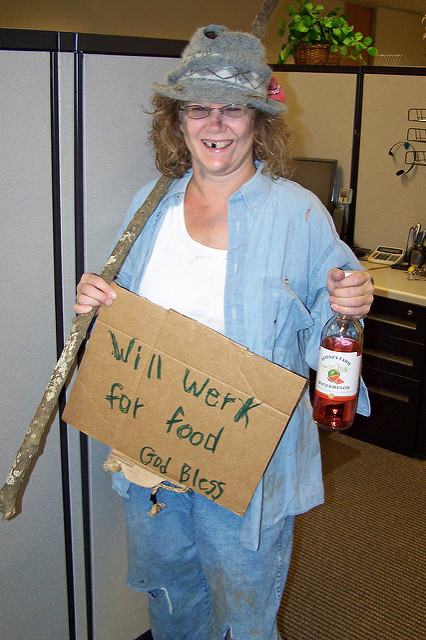 Quite a few recent posts have been about the statues and the many groups of Americans represented by the figures — including children, women, minorities, senior citizens, veterans, the elderly, and the sick, also including returning service members with Traumatic Brain Injury and Post-Traumatic Stress Disorder. Today, we mention some of the ugly details that surround the broad strokes that paint the picture of homelessness in the U.S.A.

The way things are for a lot of folks, homelessness is only one of their problems, and not necessarily even the worst. Whether housed or not, a 90-year-old with one leg will still be a nonagenarian amputee. In that quandary, as in many others, homelessness is the unhealthy condition that is perfectly capable of being upgraded; a factor and perhaps the only factor that is amenable to change.

This leads to the philosophical position that zero homelessness is not an end point, but a bare and basic starter level from which we can launch humanity into a universe where existence beneath a roof is the bare minimum achievement, surmounted and left behind in an effort to assure that everyone is not only housed, but healthy. Imagine that world!

Why bring this up?

A recent attention-commanding headline from GlobeSt.com reads, “Housing Isn’t the Key to the Homeless Crisis,” which, if true, is startling news. “Maybe merely housing the homeless isn’t the right approach,” say those who prefer to recognize and address the complicated, multi-faceted nature that societal problems tend to possess.

Kelsi Maree Borland reported on the Re-Habit concept, which aims to help people become self-sustaining. This happens through support centers that provide aid, treatment, counseling, and training programs that last for a year or maybe even two. She quotes David Senden of KTGY Architecture + Planning, who says,

If we keep thinking about homelessness as a housing problem, I think we are missing the point. A big reason for homelessness is not because people can’t find housing but because of other issues that have led them into homelessness.

As in many other programs, seniority leads to leadership. People who have overcome problems become counselors, and only need to learn the skills, because they already know the street-level sociology.

But with no implied disrespect, this concept is also reminiscent of the rough outline followed by many agencies and not-for-profit organizations, who have taken advantage of the system to rip off taxpayers and unlawfully hold desperate people as virtual prisoners, while profiting from their labor. Among the public there is a certain amount of interest in reform, like the idea of diverting low-level offenders away from the penal system and toward alternatives. Seeing this, some unscrupulous, overly-entrepreneurial opportunists have taken advantage of the need for various kinds of rehab facilities.

Watching over the weak

All programs, everywhere, that deal with vulnerable people, need oversight not only by responsible authorities, but by caring members of the public. Speaking of which, we live in a country where, to a large degree, skin color is still destiny. By and large, people of color tend to wind up on the wrong side of legal charges, at a disproportionate rate, and not because they are inherently more prone to crime.

Not surprisingly, people who have served time are less likely to be able to find work, and more likely to find themselves on the street. Here is the gist of a report by Jeff Stein for The Washington Post. (The rest of it may be behind a paywall.):

About 6 percent of baby boomers and 17 percent of African American baby boomers have been homeless at some point in their lives, according to the first national study in decades to look at lifetime homeless rates. The study, released last month, suggests older black Americans are about three times more likely to experience homelessness than white Americans.

By the way — and this should really not need to be said — but please do not celebrate the upcoming Halloween festival by creating for yourself, or anyone, a costume meant to represent a homeless person. Thank you.

Source: “Housing Isn’t the Key to the Homeless Crisis,” Globest.com, 08/24/18
Source: “1 in 6 older black people have been homeless at some point in their life, study finds,” WashingtonPost.com, 10/09/18
Photo credit: Beau B on Visualhunt/CC BY