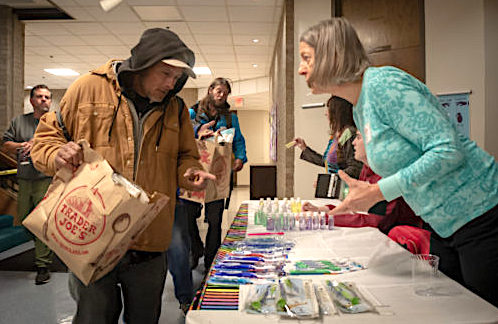 People who have lost everything, and who sometimes are made to feel like they are nothing, need to be reminded that they are not stupid or helpless. People need to know they still have something to bring to the table, and the world is just a little bit better because they are in it. When advocating for people experiencing homelessness, an unquestionable best practice is to always elicit and promote the clientele’s involvement.

One person might address the crowd at the annual House the Homeless Memorial, and discover a talent for public speaking that opens a whole new life path. Another might have a skill set that makes the annual HUGGS event run smoother than it ever has before. Several band members are formerly homeless, including band leader PJ Liles, who co-chairs the House the Homeless (HtH) Board of Directors. Members of Austin’s homeless community contribute to the winter gear distribution party as greeters, hall guides, room monitors, custodial workers, and kitchen helpers.

If you want to know about homelessness in Austin, ask the experts. The HUGGS guests contribute to the general sum of useful knowledge by filling out a survey. Each year a crucial topic is explored — health; work; sleep; traumatic brain injury; interactions with the police. HtH President and co-founder Richard R. Troxell says:

From my interaction with people experiencing homelessness, we craft the annual survey theme and questions. Every time one of our participants completes a survey, they are charting the path that we then collectively take to prevent and end their homelessness — for example the Universal Living Wage.

Everybody wants their protest signs seen and their voices heard. Of course, people gather on Bridge Day and Tax Day to help get the message across. Richard says of House the Homeless,

He says this with authority because he’s talking about himself, and Dear Reader. If you haven’t read his book yet, well, what are you waiting for? That’s Looking Up at the Bottom Line by Richard R. Troxell.

Besides being President and co-founder of House the Homeless Richard is also Director of Legal Aid for the Homeless, where he works closely with people who are disabled. He says, “Homeless folks helped us devise our fix for the SSI allotment program among many other programs through the years.” (The book can also be found here.)

A procedure shown by experience to be correct is a “best practice.” Now, a bunch of questions and caveats can sprout from this. Once the decision is made, we have to forge ahead with a creative kind of cognitive dissonance. First, we must have 100 percent confidence in this move, because to do otherwise can doom it from the start. We have to believe it’s the best practice, or else what possible justification or motivation could there be for doing it?

And also, once the practice is established, and no matter how effective it turns out to be, it is vital to have a simultaneous mental reservation — to never forget that there might be an even better way to do the thing. To accept something as correct, and stop there, is to invite mental ossification, and eventual revolt. So to really stay on top of the moment, we need to believe two mutually exclusive things at the same time. That is what existential stress is all about.

For any situation there is an old saying, and one that fits here is, “There’s a first time for everything.” A methodology cannot become a best practice without having a trial run (or a hundred). How can anyone empirically know what is the most effective way to do a thing, if it has never been tried that way before? They can’t, which is why research data alone is sometimes enough to be deemed a best practice until something better comes along.

Leadership is an optimal combination of two mindsets: This Is Great, and This Could Be Better. Leadership includes the ability to administer an organization according to the rules and the best interests of the people it is meant to serve. It also encompasses the ability to think on one’s feet, look for the cracks in the opposition’s armor, and improvise, on the fly, what one hopes are best practices.

One of Richard’s fond memories is of the Kids for Kids’ Sake project. Children made drawings to express their feelings about the holidays. They were processed into packets of 12 holiday cards, and sold to raise $1,500, which was then contributed to the Salvation Army to create a play-scape for the children to be in, while their parents looked for work.

The Statues are Coming!

Watch this space for news.