How to Become Homeless: Get Burned Out 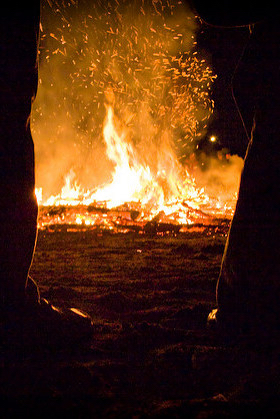 For The New York Times, Kirk Johnson and Conor Dougherty interviewed people experiencing homelessness for the first time in the California city of Santa Rosa. Some consider themselves lucky to have grabbed cell phones, passports and a few clothes before fleeing the deadly blazes. (If you don’t have time to read the whole article, look for the story of a man named John Page.)

Most of the fire refugees who gathered at a donation center did not even have “the paper trail of their lives: deeds and marriage licenses, tax files and social security cards.” Formerly secure Americans are learning the hell of being without documents, a condition all too familiar to both the chronically and temporarily homeless people of America.

Of the estimated 100,000 Northern California evacuees, some travelled as far as 70 miles to take refuge in San Francisco and Oakland, which were pretty crowded already, and expensive. A lot of those folks have nothing left to go back to. The cost in human lives is terrible with 40 people already known to have died.

NIMBY all over again

An old joke goes, “What’s the difference between a developer and an environmentalist? The developer wants to build a house in the woods; the environmentalist already has one.” This has been part of the problem in the state’s counties of Napa and Sonoma, where new housing starts come nowhere near to matching the number of new residents.

The people who work in San Francisco and Silicon Valley have to live somewhere, but there is resistance to building in rural areas. The reporters also cite…

[…] the complexities of California’s housing, zoning and building regulations, and the environmental problems involved in cleaning up home sites made toxic by the ash from the fire.

Climate change increasingly plays a part in the likelihood of more fires. Tribune News Service describes the recent past and the probable future:

Six years of drought was followed by record winter snow and rain, followed by record heat from April through September. Santa Rosa hit 110 degrees Sept. 1, a record high for the date. Five weeks later parts of the city caught fire, destroying hundreds of homes and businesses. Worse extremes can be expected in coming decades.

Some Santa Rosa evacuees are sleeping at the Sonoma Fairgrounds on Red Cross cots. Others are 20 miles away at a shelter manned by the National Guard. What will change in the aftermath of the current fire disaster? Housing prices were already ridiculously high and can only get worse, now that nearly 6,000 buildings have been destroyed. There will be many things to consider, in future housing plans, including better escape routes.

No one is exempt

Recent events make it very clear that people experiencing homelessness are not a different species. A fire can happen to anybody. Almost everyone knows someone whose life was changed irrevocably by a fire. Fire plays no favorites, and some of the narratives contain painful irony. For instance, a 2012 story (that has not been archived on the Internet) described how a Syracuse, New York, couple who had devoted their lives to helping the homeless, were themselves made homeless by a fire.

Seemingly senseless accidents happen, like when a toaster jammed and burned a house leaving an Iowa family of five homeless. In 2015, in Minnesota, a family that had been doubling up with relatives for three months finally completed the formalities and complied with the regulations to move into a house they were buying. The were in residence for only two weeks when a fire made them homeless again.

Sometimes it’s nature, and sometimes human malice is to blame. In January of this year, an apartment fire left 18 people homeless. The man arrested and charged with arson had a grudge against one of the tenants, and had made a previous attempt to burn the building. All kinds of things can happen.

House the Homeless has mentioned T.C. Boyle, whose novel The Tortilla Curtain sketched a heartbreaking picture of the existence of undocumented workers living in a ravine on less than nothing. His newer book, A Friend of the Earth, projects the bleak outlook for the California of the future. When a reporter asked for a remark on the current fires, Boyle said:

People say I was prescient by what I predicted for 2025. The sad joke is I should have said 2015. It is frightening how quickly we got here.