In Praise of Good Works 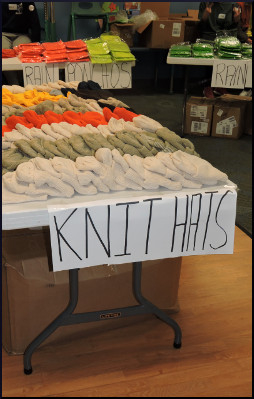 It feels so good to recognize and celebrate heroes. Let’s keep that momentum going. First of all, right here in Austin, Texas, the 16th annual House the Homeless Thermal Underwear party took place on December 30, hosted by First Baptist Church.

The event supplied somewhere around 600 people with “winterizing” gear including thermal underwear, scarves, hats, gloves, ponchos, and safety whistles. There was a hot meal and a live band.

Fox7 TV news broadcast a segment with particularly interesting words from House the Homeless President Richard R. Troxell and volunteer Sherry Sampson. A second TV station, WKBN27, emphasized another aspect of the winter preparedness event, with the headline and subtitle:

As House the Homeless prepared homeless individuals for winter, the organization was also surveying them about their interactions with police

They went into the matter in some depth, including an interview with Officer Shelly Borton, who works for the city’s Homelessness Outreach Team, “which is made up of two police officers, behavioral health specialists, a paramedic and a social worker.” Also, Richard discusses the repercussions on people’s lives when homelessness is criminalized, and people are cited for such violations as sitting in a public place:

If you’re an employer and you’ve got to decide who to employ and you’ve got somebody with no tickets here and somebody with 10 tickets that are criminal in nature, you’re going take the person without the tickets. It becomes a barrier for you to escape homelessness, even though you’re making every effort.

San Francisco was the source of a slightly offbeat story where the hero contributed not food or clothing, but an example of principled defiance. Last March a Department of Public Works employee declined to help tear down a makeshift dwelling. Instead, she filmed the sad demolition and added a commentary complete with salty language and encouragement to a co-worker to refuse also.

Her matter-of-fact attitude makes us forget that the Bay Area is a hard place to survive in, and the possibility of being fired is no joking matter. It takes courage to take a stand. A DPW spokesperson confirmed that…

To refuse could be construed as insubordination, and subject the employee to disciplinary action, dependent on the findings of a thorough and fair investigation…

The person who posted the 2:19 video to YouTube wrote:

I’ve been hearing about a number of DPW workers refusing to be a part of the injustice taking place on our streets right now.

This final story is not current, but it is timeless. World-renowned poet W. H. Auden was remembered by friends for his unwillingness to be seen doing a good deed. Edward Mendelson
described it as going out of his way to seem selfish, when in fact he was very generous. For instance, in the 1950s, Auden worked on a TV production where he demanded to be paid early and made a memorably unpleasant scene about it.

Later on, when the canceled paycheck made its way back to the accounting office, someone noticed that Auden had signed it over to a third person. The recipient was Dorothy Day, who ran the Catholic Workers homeless shelter in New York City, which the fire department was trying to close down. Auden’s contribution paid for the necessary repairs and safety updates to keep the shelter open.