Nonsense Around a Corporate Decision 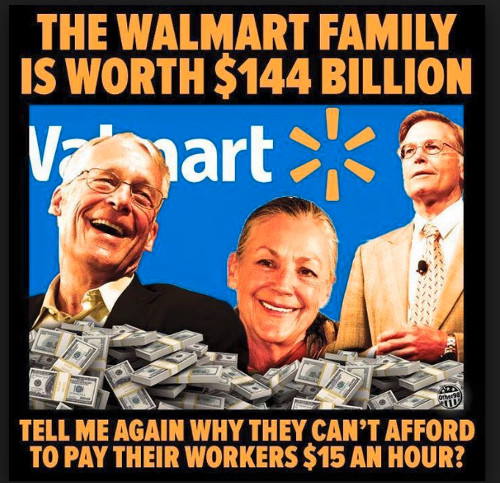 Apparently, the minimum wage issue is vulnerable to all kinds of potential spin, depending on particular number-crunching techniques, how various terms are defined, and so forth. As in so many fields of human endeavor, unreliable data can doom to failure any attempt at meaningful analysis.

Putting that aside, there are things the voting public forgets, for better or worse. For instance, these few sentences from Garry Reed say a lot:

Keeping that in mind, it is not surprising that in no state of the Union can a full-time minimum wage worker afford to rent a one-bedroom apartment. It is difficult to reconcile a full-time worker’s inability to afford shelter with the fact that corporate executives pull down as much as $10,000 PER HOUR.

Here is a repetition of the assertion that we just don’t understand what the minimum wage is meant to be, phrased this time by Sara Lin:

That last bit is important. Anyone who has owned or managed a small business has stories to tell about absolutely clueless new hires. Through ignorance or carelessness or just plain inability to function in a socially acceptable way, a single employee can cause enormous damage. But they still have to be paid!

In some businesses, elderly retirees are welcomed because at least they’ve got the basics down. A person accustomed to the world of work is familiar with the concept of showing up on time, wearing shoes rather than bedroom slippers. It is possible to empathize with employers who resent compensating incompetence.

Of course, salary isn’t the only factor. There are unemployment and work comp insurances to be paid. And the phenomenon known as “wage compression,” which is what happens when starting salaries are too close to whatever the existing workers are getting. Not surprisingly, the old hands feel unappreciated and indignant, and ask for raises.

It is appropriate to worry about effects on small businesses, but statistically, most minimum wage workers are employed by companies with over 100 employees — in some cases, thousands and thousands of employees, who are slighted by such tricks as keeping their hours under the “full-time” limit, to avoid paying benefits. As a result, America is full of people working at two or three different minimum-wage jobs that add up to well over “full-time hours,” who are still not entitled to any benefits.

One of the behemoth corporations is Walmart, famous for the fact that its employees are so poorly compensated, many are on food stamps and other forms of government assistance financed, of course, by the taxpayers. At the top of our page is an internet meme discussed by a writer named Steve Straub in a piece titled “Another Ridiculous Liberal Minimum Wage Meme DESTROYED by Facts.”

Here is how the writer purports to annihilate the concept that Walmart could easily afford to pay its workers more:

Earlier this year, Walmart raised the starting wage for more than 100,000 of its employees. This move reportedly cost at least $1 billion to implement, though the long-term costs could potentially be far worse.

Supposedly, because of this gesture, Walmart had to not only fire 1,000 employees from its home office, but close five of its stores across the nation, affecting another 2,500 employees. As Straub predicted, it did get worse, because only weeks later Walmart announced it would close 154 stores, affecting 10,000 workers.

All, supposedly, because the extraordinarily generous (yes, that is sarcasm) company raised some workers to $9 an hour. Straub winds up with:

When either government or businesses raise the minimum wage, it skyrockets costs.
To compensate, businesses then lay off workers. So yes, some workers wind up with a more livable wage, but at the cost of a bunch of other workers winding up with NO WAGE at all!

Economists could argue about the validity of this conclusion all day. The point here is: How does any of this realistically discredit the disputed meme?

The Walmart family is worth $144 billion. Tell me again why they can’t afford to pay their workers $15 an hour?

The question still stands. As the old saying goes, the Walmarts already have more money than God. With the family taking such a huge cut of the profits, ordinary people are indeed still asking why the Walmarts can’t afford to pay their workers better, or even a lot better.

Straub’s article didn’t even put a dent in that question. There is nothing ridiculous about wondering why the executives and shareholders of Walmart are justified in taking such a large share. The only ridiculous part is that they are able to get away with it.