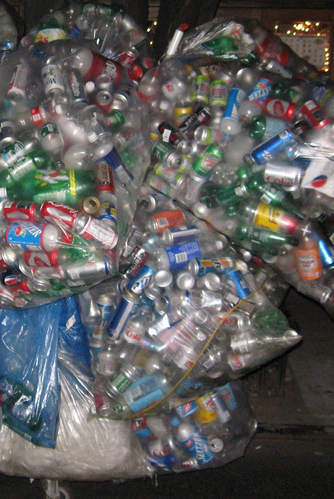 In any city, there are bound to be a few jobs specially allotted to, or created by, those who are out of options. The viability of a career in recycling depends on local ordinances; access to a buyer; having a way to store and transport the merchandise; and other factors.

California’s recycling rules have been in effect for almost 30 years, and for many street people, their only income derives from bottles and cans. In San Francisco, a person might make between $15 and $35 per day, depending on good weather, good health, and good luck in not having their haul stolen by competitors. There used to be 30 redemption sites and now are only two, very close to each other geographically, so people in any other part of the city have a hard time.

Waste management expert Martin Medina estimates that about 1% of the earth’s urban dwellers (about 15 million people altogether) live by harvesting society’s castaway materials. In some places their activities are, of course, criminalized.

For CommonDreams.org, Jack Chang wrote a respectful tribute to the trash pickers of the world:

Every day, they rescue hundreds of thousands of tons of material from streets and trash dumps that get reprocessed into all kinds of products. That not only cuts back on the resources used by industries but also lightens the load on dumps that are quickly reaching capacity.

“Urban Tactics; Nabbing the Elusive Nickel” by Saki Knafo is a still very relevant description of the world of “canners” in New York City a decade ago.

In 2012, for The Huffinton Post, Arthur Delaney described the activities of the Mid-Atlantic Regional Council of Carpenters which hired the homeless in Washington, D.C., for $8.50 an hour, to carry picket signs and raise their voices in chants. Critics decried a “cynical use of homeless people to do this dirty work.” The union seemed out of patience with anyone who questioned this hiring practice. Its members were busy at their jobs, and besides, the method had already been deployed in seven other cities.

From one of them, only the previous year, Joel Gehrke had reported this story:

In Grand Rapids, Mich., the Michigan Regional Council of Carpenters has started protesting companies that hire a local non-union carpentry firm, Ritsema Associates. Where does the union get its picketers? It hires them from a homeless shelter that is supported by Ritsema Associates.

Some entrepreneurial individuals carve out highly idiosyncratic paths. Remember when Ted Williams, the “man with the golden voice,” was rediscovered and became for a short while an outsider celebrity? His former tent-mate offered Williams’s leftover cardboard signs for sale on eBay.