Not Every Job Is an Opportunity 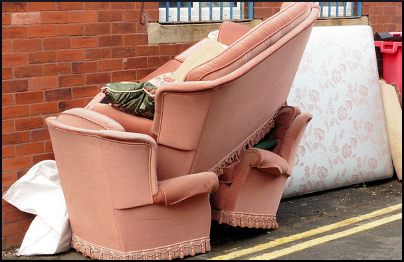 In Washington, D.C., a person experiencing homelessness can climb into a van and drink some cheap alcohol he thinks is free, but which later turns out to be deducted from his pay. His pay for what? For helping as many as two dozen other men evict a family. This overstaffing is for the sake of speed.

[…] because in D.C. evictions are overseen by the U.S. Marshals Service, which has other jobs to do — that crew must be large enough to quickly carry out the eviction.

Imagine being a kid in the only home you know, the house your parents rent. All of a sudden, 25 strange men show up, plus a number of Marshals (possibly with guns drawn). The invaders are all over the place, taking your stuff out to dump on the sidewalk, and pushing you out along with it.

The situation is lousy for the workers, too. They get into that van without knowing how long their work day will be, but with a fair certainty that nobody will be serving any food or water. It’s a “bring your own gloves” gig. Flock says the trucks are not equipped with dollies or other normal moving amenities, and if a worker gets hurt, that’s just tough luck.

Bruised or intact, there is no guarantee that the men will be returned to the starting point. They may be left stranded miles away from their home base. The promised pay might be as little as $7 for the entire day, and there’s a good chance the company will stiff them. In return for no background check or request for credentials, that’s the kind of job you get.

However, throwing people out does offer plenty of opportunity to steal from distressed ex-tenants, along with the chance to mistreat a vulnerable population, and most people quite frankly don’t need that kind of temptation laid in their path.

How it goes in our nation’s capitol

The concept of fair labor practices isn’t even a blip on these companies’ radar. The bosses allegedly engage in price-fixing. The going rate for this type of day labor used to be almost three times as much. Now the supply of destitute workers is much greater than the demand for their rudimentary services, and the workers are badly in need of cash, perhaps to feed habits.

A large law firm supported a class-action suit, but the eviction companies don’t take it seriously and the court does nothing to compel them. The Office of Labor Law and Enforcement says it has never received a complaint. And the Marshals? It’s not their job to get involved in somebody else’s wage dispute.

The American Enterprise Institute for Public Policy Research is a think tank described as both conservative and non-partisan, and it too has a point of view. Journalist Kevin Corinth captured this expressive quotation from a worker:

We have seen babies crying, grandmas… You do some kind of drugs, so then you don’t care, so you leave them on the curb over there crying, and go on to next one.

Instead of choosing someone professional who says, “I can’t do it,” they choose people who don’t have any feelings anymore, and have given up on life. Because they will get on this truck for $7.

The writer empathizes with landlords, who can’t keep housing on the market if nobody pays them. He also empathizes with the eviction crews, who after all are dealing with some pretty unpleasant feelings. They are homeless people, making other dispossessed and displaced people homeless. In such a role, who could help calling to mind their own parents, partners, or children?

The true problem is that eviction companies are dehumanizing the homeless men they hire by exploiting their addictions. Rather than being encouraged to serve with professionalism and empathy, they are encouraged to numb their humanity with alcohol.

He even empathizes with the evictees, who are not even given so much as a flyer with shelter addresses or a hotline number. The writer suggests hiring fewer workers for better pay, but, realistically, that idea has a snowball’s chance in hell.

He goes on to say:

Another solution could be to prevent evictions from happening in the first place. Recent research has shown that offering families who are at risk of homelessness modest one-time payment leads to sharp reductions in entries into homeless shelters (and presumably reduces evictions as well).

Whatever the solution, evictions are inevitable. Dehumanizing people in the process is not.