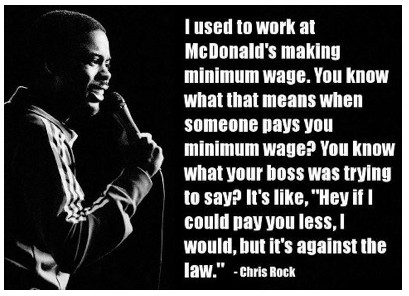 One of the most interesting aspects of the ongoing minimum wage debate is a warning that we will all be replaced by mechanical substitutes. An article from the Cornell Roosevelt Institute echoes a point that House the Homeless has made many times: that a person who works full-time ought to be able to support himself or herself without needing to apply for food stamps or other government assistance to get by.

There are pro and con arguments: If workers are better paid, they can buy more stuff and boost the economy in general. Human misery is ameliorated, because people don’t need to work multiple jobs just to survive. When people are happier at their jobs, they don’t engage in slacking, sabotage, embezzlement, or other acts harmful to the business. They stay in place, and employers are not faced with the expenses associated with hiring and training.

Jack Robbins quotes experts who do not foresee a higher minimum wage as leading inevitably to a catastrophic result:

On the other hand, raising the minimum wage is said to increase inflation and unemployment. When the cost to businesses is raised, business fires people, so rather than X number of workers struggling along, you get Y number of workers doing okay, and Z number of workers back out on the streets without any job.

But then comes the most devastating possibility of all: When human employees cost too much, businesses respond by installing robots. An Oxford University economist theorized that 47% of American workers are at risk of having their jobs automated — in other words, taken over by robots of one type or another, even if they don’t appear humanoid.

A counterargument to that is, whenever possible, businesses are going to go ahead and install automation anyway, regardless of whether or not they are being entreated to raise the minimum wage. So, either way, human workers are out of the picture.

On a global scale

Historically, there has been another devastating argument against even trying for a higher minimum wage in America: We had best not annoy manufacturers with further requests for decent pay, because it will only encourage them to send jobs overseas.

Today, that point is almost moot. So many manufacturing jobs have already been shipped overseas, what else can industry do to us? And if workers in one country decide to demand reasonable pay, business will just pull up stakes and move to another country that is even more deeply sunk in poverty, where workers will be satisfied with even less.

As writer Hamilton Nolan says it:

The global economy is the delightful playground of multinational corporations. They’re able to drastically lower their labor costs by outsourcing work to the world’s poorest and most desperate people. And they’re able to escape paying taxes… The global economy is extremely advantageous to corporations, who owe no loyalty to anyone or anything except their stock price…

Nolan characterizes the concept of a minimum wage as society’s assertion of its moral grounding, a “statement of our belief that the economically powerful should not have a free hand to exploit the powerless.” One answer would be to initiate a worldwide standard, a universal minimum wage that would confound businesses engaged in the race to the bottom.

Of course, getting the whole world to agree on anything is not an easy task. The writer mentions how the rich tend to scoff at proponents of a living wage, and accuse us of being naive dummies who just don’t understand the inherent and immutable rules of capitalism.

Not true. We understand them all too well. We understand that, as history has amply demonstrated and continues to demonstrate, absent regulation, economic power imbalances will drive worker wages and working conditions down to outrageous and intolerable levels…

The system that we have — in which the vast bulk of profit flows to corporate shareholders, rather than workers and governments — is not a state of nature. It is a choice.

Nolan makes the point that we no longer tolerate outright slavery where people are paid nothing at all. (Except that we do, with prison labor — but that is a whole separate discussion.) He says:

We would never countenance buying goods produced with slave labor, just because they were cheap… Today we only tolerate economic slavery. Today’s workers are free to quit their jobs at any time, and starve to death.

The remaining minimum wage jobs cannot be outsourced. For example: You cannot outsource digging a ditch to China. You must be on site to take tickets at the movie or show theaters. Babysitters must be present to kiss, hold and care for our babies as do childcare workers. Restaurant workers including servers, hostesses, busboys, and pot-shack workers must also be on site.

Receptionists must be on site to attend our front desk phones, to field questions and redirect calls. Nurse’s aides who clean hospital rooms, clean up vomit, empty bed pans, and even give us bed baths must be on site to care for us. Hotel and motel maids clean our rooms, change our sheets, and turn our beds to welcome us here in America. Janitors clean entire buildings including sweeping, mopping and waxing floors in schools all across our homeland.

Fast food workers who work at Bob’s Big Boy restaurant, Wendy’s, What-a-Burger, Kentucky Fried Chicken, Stub’s Bar-B- Q must be present. The Texas Chili Parlor, TGIFs, Marconi Grills, Olive Gardens, a bazillion Chinese restaurants, etc., and of course McDonald’s workers must be present, on sites all across our nation to serve our people. And they deserve to be paid a minimum amount sufficient so that they won’t require a subsidy from you and me, when it is the employer who benefits from their labor.

“Open Letter to the Presidential Candidates”

“Livable Incomes: Real Solutions that Stimulate the Economy: A call to action to create economic stability and growth (Kindle Edition)”