Prison As Shelter — A Worldwide Problem 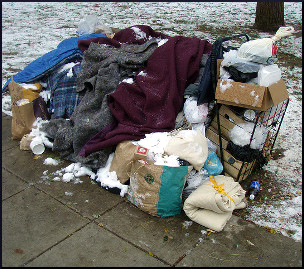 Recently, Kathryn Phelan wrote about the tragedy that brought so many immigrants to America:

Forty percent of Ireland’s population died in the mid-1800s, in the Great Famine. Men stole food, either to feed their families or in the hope of going to jail, where they were guaranteed bread and porridge every day. The jail was overrun with petty thieves who all had the same idea.

This problem still exists there. For one example, an Irish Examiner headline read, “Homeless man asked to be arrested.” But a simple request was not enough to accomplish that goal, so the man told the authorities he would do something stupid, and did. In a pharmacy, he went behind the counter to rummage through boxes of pills, and this got him a five-month jail sentence.

A month later, in Hereford, England, a man asked the police to lock him up, was refused, and had to break the window of a pharmacy and grab the closest item from it, in order to accomplish his ambition. Around the same time, another Englishman, who had narrowly escaped serious injury or death when the dumpster he slept in was picked up, nicked two cans of beer in an effort to be arrested, but suffered disappointment when the judge only sentenced him to one day in jail.

Another British subject, who had been our of prison for less than a month, stole a bottle of vodka as his ticket back to four more weeks of shelter and food. In yet another part of England, this headline and subtitle told pretty much the whole story:

Homeless Teesside man commits hundreds of drink-related crimes to get a bed in jail: Michael Patrick Williams in court after wandering into local police station clutching an open can of cider a fortnight after doing exact same thing.

Although Williams’ record included almost 400 similar offenses, sometimes the magistrate would thwart his purpose by sentencing him to only one day, and then declaring that the time had been served by his showing up in court.

More recently, a nearby British town produced this news item:

Bradley Grimes had been given a four-month suspended prison sentence for breaching anti-social behaviour orders (ASBOs) by sleeping in shop doorways. The 23-year-old asked the court to activate the sentence and take him off the streets.

Grimes, suffering from autism and a brain tumor, had been a ward of the government since the age of seven. On this occasion, he asked to be jailed because of his upcoming birthday, when he wanted to wake up somewhere warm with food to eat.

In Durham (also England), a homeless man walked into a chain store armed with a pool cue in one hand and a machete in the other, in a successful attempt to be arrested. But just in case those weapons were not provocation enough, he also carried two billiard balls in a sock.

In the Australian city of Waterford, the manager of a shelter told the press:

This time of year is always berserk. We either have homeless people trying to injure themselves to get a warm hospital bed or committing petty crimes to get a jail cell for the night.

In Perth, a 33-year-old man who had been thrown out of his lodging that day, entered a police station and turned himself in, asking for a five-year sentence. There were no outstanding warrants, but the six-inch knife in his backpack was enough to get him housed in a jail cell for four months.

How cold is Iceland? Cold enough so that police will occasionally let people voluntarily inhabit jail cells without being charged with a crime. Emilia S. Olafsdottir Kaaber wrote:

Demand for space at the homeless shelter on Lindargata has been unusually high as of late. “We’re full night after night and have at times had to turn people away…” said Sveinn Allan Morthens, manager of the shelter.

For The Guardian, the manager of a small independent charity in Britain wrote about the difficulty of finding shelter for a convicted arsonist, which is for various reasons more difficult than finding a place for sex offender. It is especially futile to send the “single, non-priority homeless” to the government for help.

We are supporting more and more people who, just five years ago, would have received help via the Adult Social Care budget. This has been pared back so far that a choice is made on who is worthy enough to be supported.we quickly fall into the trap of using “in” terms such as complex need and high risk almost as an excuse…
Labels are so easy to throw about. They land conveniently on the shoulders of those we want to keep in a box. Challenging, attention-seeking and damaged are common labels and we stop seeing the person and instead see a problem which we feel the need to contain.

All over the world, many people accept the sad fact that prison is their social welfare safety net of last resort.