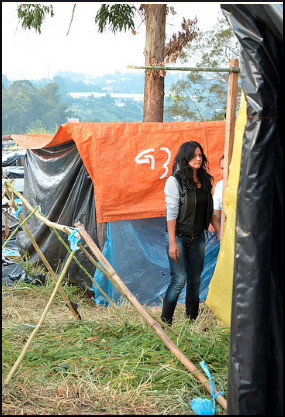 Granted, the situation described in Fort Worth, TX, in May was dire, with residents being attacked by “transients,” especially after a tent city in nearby Dallas was forcibly depopulated. But still, this headline is worded in a pretty offensive way: “Families, business owners ‘fed up’ with homeless in Fort Worth.” According to this insensitive phraseology, both business owners and families are totally separate and distinct populations, not overlapping with “homeless” at all.

True, there are not many homeless business owners. But there are plenty of homeless families, despite this headline pretending that “homeless” and “family” are radical opposites like “acid” and “alkaline.” This headline implies that they are mutually exclusive terms. It tries to give the impression that families are never homeless, and people experiencing homelessness are never families.

A matter of interpretation

Then, there is the type of headline that makes false promises. “Solve homelessness by addressing its root causes” gives the impression that some hard-hitting journalism will follow, pointing a finger perhaps at the cabal of bankers that caused a worldwide recession in 2008, or the cynical mortgage brokers who allowed the housing market to lose all semblance of sanity, or the businesses that refuse to pay their workers a living wage.

But at what is the finger pointed? What are the identified root causes of homelessness? Mental health issues and substance abuse, and people. Journalist Richard R. Bebout writes, “People with persistent mental illness and substance-use disorders make up a disproportionately high percentage of the District’s homeless population.”

In the old days there were workhouses, insane asylums, orphanages, and prisons where society’s unwanted members could be warehoused, and mostly they were horrible places. At the same time, for many families, a lower cost of living and more spacious homes allowed for options. In the old days, more families could afford to donate a spare room to an ailing relative, and maybe even shelter another relative to help care for the first one.

Here is another eye-popping, jaw-dropping piece of news, this time from Great Britain. After one sentence of run-up, the important part is in bold print:

All tenants are being asked kindly to leave Carpenters Place and find alternative accommodation so that the company can continue with helping the ever growing need of homelessness.

At least here there is no doubt about what is happening, and no blame is directed at medical conditions. Alon Aviram writes: