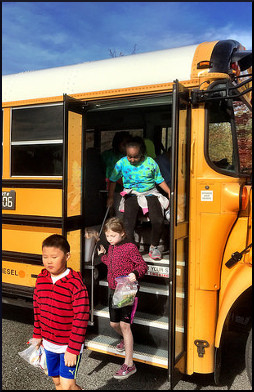 Last week, House the Homeless noted that, across America, some 3% of public school students are experiencing homelessness. Sometimes it seems like we mainly hear about happenings in New York and California, because they are the big states representing the East Coast and the West Coast, so they appear important. Today, we look at some news stories, all published within the past year, from states that don’t get as much attention.

This very recent one says it all in the headline: “There are 29,537 homeless kids in Arizona public schools.” Just for reference, the smallest-size football stadiums that Wikipedia bothers to list are 30,000-seaters, so these kids would just about fill one of those. Journalist Michael Hughes characterizes these children as…

[…] young outcasts who, through no fault of their own, have entered a world of motels, doubled-up quarters with relatives, a life on the streets or emergency shelter.

Also, before the recession, there were fewer than 20,000. The greedy and irresponsible financial tricksters who caused that meltdown have a lot to answer for, and the consequences of their misdeeds will linger for generations to come. Safe, affordable housing is the very bedrock necessary for an educated and conscious population.

While the Arizona homeless student total only increased by 50% since the recession, another state has seen a 100% increase. “Number enrolled in Arkansas schools doubles in 10 years,” the headline says. That may sound like an impressive rate of increase over a decade, but in the city of Lexington, Kentucky, it took only three years for the homeless student population to double.

A study by the Lexington Fair Housing Council determined, to no one’s surprise, that “elementary schools with the highest percentage of homeless students were ranked much lower in overall academic performance.” The Fayette County Schools Superintendent expressed disappointment that the Council’s report didn’t offer more answers, saying:

Speaking not as a superintendent, but as an individual who experienced housing insecurity and food insecurity as a child, I implore the council to look at the root causes of homelessness in our community and develop bold recommendations to create a safety net for our families and children.

However, the director of the Homeless Prevention and Intervention Office told the press that although he and the others in the homeless provider community had tried to meet with Superintendent Manny Caulk, “that meeting has not yet happened.” No doubt this same scenario of unscheduleable meetings is being played out all over the country in large cities and small towns.

Kentucky as a whole, incidentally, could fill another of those 30,000-seat football arenas with homeless students. But the state of Washington has them beat, with 35,000 enrolled in public schools, and as for how many others are wandering around, unbeknownst to authorities, that is anybody’s guess.

We have all heard of the McKinney-Vento Act and how much it is supposed to help. But…

Public schools in Kent get no money from McKinney-Vento because the available funds are distributed through a competitive grant process… That means the district spends “thousands and thousands” out of pocket for staff and transportation required by the act.

Just 24 of 295 school districts in Washington received McKinney-Vento money for a three-year period starting in 2013.

In Boston, Massachusetts, during this school year nearly 4,000 students are without homes. With the city’s average apartment rent at $2,300, this is not an astonishing outcome. Nor is it likely to change any time soon, unless serious action is taken.

Obviously, there are quite a few more states we didn’t even get to today. An important aspect to remember is, these tallies don’t even include “unaccompanied youth” who should be enrolled in school, but aren’t. They are mostly, as the old expression has it, “in the wind.” They are easily ignored now, but during the decades of adulthood that lie before them, far too many of those kids will give us reason to regret not looking out for them or taking better care of them.