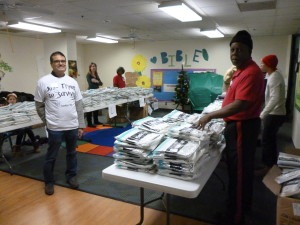 In case you were wondering if the Thermal Underwear Drive will take place again this year, the answer is, of course! The date is January 1, that’s New Year’s Day, and the place is First Baptist Church, 901 Trinity Street, Austin, TX 78701. Guests will attend from 12 noon to 2 p.m.

House the Homeless invites anyone in or near Austin to take part by donating money or by showing up to help share the HUGSS. (That stands for hats, thermals, gloves, socks, and scarves. Oh, and rain ponchos and safety whistles.) Another way to help is by serving the hot lunch. To see many heartwarming photos from last year’s event, check out the Thermal Underwear Drive page.

Also, the page has a donation button. It’s a golden oval that says “Donate.” You can’t miss it. The donation of $35 will equip one person with the winter necessities, but please give whatever you can. Winter is no joke when most of it is spent outdoors — and a hatless, gloveless winter is almost unimaginable.

We’re going to add a special note here about socks. They are vital, and people experiencing homelessness need a lot of them in every season of the year. We’re not saying a new pair every day, but a lot, and here’s why: It is almost impossible to find a way to wash and dry socks. It’s difficult enough just to find a toilet. Keeping clothes clean is, too often, a luxury. Along with pay phones and single room occupancy buildings, laundromats have almost disappeared, and the few that remain are quite expensive.

In that situation, where do you take off your dirty clothes? And what do you wear while they wash and dry? Socks, consequently, are often worn until they are fit for nothing but disposal. A new pair of socks makes a difference that, hopefully, no one reading this page will ever be forced to understand. So please take our word for it. Socks!

This collection of essays known as the blog has often mentioned the annual surveys that House the Homeless conducts along with the HUGSS event. (That page has a donation button, too.) The survey topics have included work, health, sleep, use of resources, and police interactions. The results are widely shared with the press and other organizations nationwide.

House the Homeless also welcomes volunteers to help with the survey! It is an eye-opening opportunity to take part in a much-needed and truly significant feat of documentation.

Across the nation, many journalists have contributed to the valuable archive of “The Face of Homelessness” type stories. They are personal, subjective, empathic, and vital. The surveys contrast with and complement those narratives with a wider, more encompassing and objective picture. It is one thing to tell the story of a lost person with PTSD or traumatic brain injury, and another thing entirely to grasp the staggering percentages of unhoused Americans who suffer from those debilities and many others.

This is kind of mind-blowing

HtH President and co-founder Richard R. Troxell points out a detail that does not occur to very many safe and comfortable Americans:

These are the homeless for whom there is no housing, although many of them have stood in line since before Hurricane Katrina, who have lost everything and will continue to be stuck on those streets because evacuees from the endless wars (the push to house our veterans), and then more evacuees from Hurricane Harvey, were given the housing that was to have been theirs.

In other words, contrary to the fairness principle of “First come, first served,” what we see happening is “Last come, first served,” as people who have struggled for years to escape homelessness are again pushed to the end of the line. This in no way implies that any human should be left roofless and destitute. If the government would get its priorities straight, and allocate resources toward life rather than death, there could be room, and rooms, for everyone. The problem is not a lack of wherewithal, but a lack of will.

It couldn’t be easier to participate

But let’s get back to the Thermal Underwear shindig. Through the miracle of technology, all the volunteer options are spelled out on the sign-up page, where a volunteer can specify a task and a time slot somewhere between 10 in the morning and three in the afternoon. Overall, the public event is bracketed by two hours of prep time and one hour of cleanup, and not everyone needs to be there for the whole time.

One-hour, two-hour, and three-hour shifts are available. Understandably, many people are not able to volunteer, especially when they live outside the local area. But that doesn’t mean you can’t participate! Did we mention that every page of the House the Homeless website has a donation button?