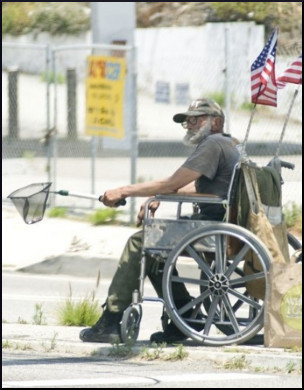 In the previous post, we learned that the servicemember suicide rate is not quite as high as what people go around saying. Forget about the frequently and erroneously cited 22 suicides per day — it’s “only” 20.6 per day. That is also an upsetting statistic, especially when we consider the enormous number who are not counted — the slow suicides who are trapped in a cycle of homelessness, self-neglect, addiction, rejection, and hopelessness.

Of course, some politicians are well aware of the problem’s dimensions, such as U.S. Congressman Steny Hoyer, who represents Maryland’s 5th Congressional District. He has worked on veterans’ issues, particularly suicide, and on our most recent Veterans Day he made this statement:

We must stand with our veterans and their families, not just in words but in taking action to improve veterans’ access to quality health care, combat the alarming rate of veteran suicide, ensure that those returning from service can find good jobs that ease the transition back into civilian life, and make certain no veteran is homeless and living on the streets.

Every now and then, a really catchy title shows up in a list of references, and demands to be followed up on. In this case, the 24-year-old article appears to still be beyond a paywall. Its intriguing title is “A theory-based nursing intervention to instill hope in homeless veterans.”

The authors are Jane H. Tollett, who at the time was serving as Chief of Homeless Veterans Service in Anchorage, Alaska, and Sandra P. Thomas, who at the time directed the Ph.D. Program at the College of Nursing, University of Tennesee. The Abstract says,

This quasi-experimental study sought to determine if a specific nursing intervention to instill hope would positively influence levels of hope, self-efficacy, self-esteem, and depression in homeless veterans. Miller’s Model of Patient Power Resources served as the conceptual framework from which a middle-range theory of homelessness-hopelessness was derived to guide the study… Support for the theory was seen in the increased levels of hope and self-esteem and decreased depression in veterans who received the nursing intervention.

In a review of this study published by Advances in Nursing Science, Bonnie K. Fahey, BSN, RN, wrote:

Often the hospitalization of the homeless veteran is little more than a reprieve from the stressful life on the street. The authors demonstrated through their research that homeless veterans can overcome hopelessness by taking an active part in treatment.

The homelessness-hopelessness theory and its implications have given me a clearer picture of the dynamics involved in the predicament of homeless veterans. The prospect of breaking the cycle of despair in this underserved population is both encouraging and exciting.

“Suicide is painless/It brings on many changes.” To a previous generation, that line written by Mike Altman was intimately familiar as the M*A*S*H theme song. The TV series about the Korean war was really about the Vietnam war, and incidentally, what were the active duty and veteran suicide rates during the Vietnam war? Hard to say.

Last year, the PBS documentary “The Vietnam War” stirred up a lot of feelings, some of which are expressed by John Ketwig, lifetime member of Vietnam Veterans Against the War, an organization that is still very active. To his mind, there may have been between 150,000 and 200,000 Vietnam veteran suicides.

Those numbers are guesswork, and maybe as good as anyone else’s guess, including the official record-keepers, and here is why:

There are no reliable statistics about veteran suicides. Most states and localities do not submit suicide reports to the VA, and in many cases the local examiners are not sure if the death was indeed self-inflicted…

The statistics that might clearly define the scope of the problem simply don’t exist, and we are only seeing a fraction of the problem. Realistic numbers will never become available from the government or military because of the negative impact they would have on the costs of VA health care, or on the recruiting efforts so vital to the all-volunteer military.

An article by Meg Lacy from the website Psychology Benefits Society, only two years old, highlights the hazards that may face surviving Vietnam-era vets today:

Despite the fact that the Vietnam war occurred approximately 40 years ago, the moral injuries sustained are still felt by many who served our country. It is not unusual for Vietnam Veterans to have coped with difficult times by staying busy at home or at work. As retirement looms, it is not unusual for Vietnam era veterans to experience additional age-related risks such as social isolation, a feeling of burdensomeness, and changes in health status.

Lacy’s message is that coping strategies that have held a person together for decades may fail at this crucial juncture. It also suggests that friends and family members might be extra vigilant, and that veterans themselves take a step toward self-preservation by acknowledging their own vulnerability at this transitional life stage.

It’s easy to advise, “Get help from the VA,” but the Veterans Administration is not always the most efficiently run or speedily responsive organization. Furthermore, some civilians have an unusual attitude, as demonstrated by an ABC News headline, “Suicide Rate Spikes in Vietnam Vets Who Won’t Seek Help.”

The story quotes Rudi Gresham, who was a combat soldier in Vietnam, and who went on to become a senior advisor to the Department of Veterans Affairs in the George W. Bush era:

These guys were the first generation not to trust the guys in the white coats, and they didn’t trust the government… A lot of the Viet vets with PTSD held it in… They didn’t want to let their family know their dark secret. They wanted to be in the workforce and be productive like the generation of World War II, but they were not respected by society.

In the following quotation, Michael De Yoanna points out the fallacy inherent in the “won’t get help” trope, as it applies to vets who served more recently, but maybe nobody ever got around to saying it about the veterans of previous conflicts:

The Government Accountability Office, found that 57,000 Army, Air Force, Navy and Marines troops discharged between 2011 and 2015 for misconduct had post-traumatic stress disorder, brain injuries and other conditions, like adjustment, anxiety and depressive disorders. Of these troops, more than 20 percent, or about 13,000 of them, received “other than honorable” discharges, which made them potentially ineligible for veterans benefits, including access to health care for their conditions… Those troops, who served in Iraq and Afghanistan, had mental health disorders and brain injuries. Misbehavior among troops — and thoughts of self-harm — can be symptomatic of those kinds of wounds.

So, there’s another thing to worry about. The entire topic of “bad paper” discharges is currently appearing in courtrooms across the country.

Watch this space for news of The Home Coming, the sculpture whose figures include a veteran. The Home Coming, the fulfillment of years of dedicated work, is coming home to Austin. And get the story of one Vietnam veteran, Richard R. Troxell, co-founder of House the Homeless.
Reactions?