Tiny Homes: The Problem Beneath the Problem 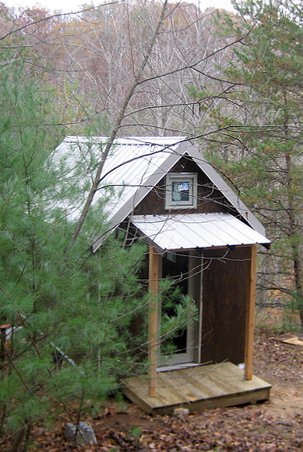 How many kinds of small, self-contained dwellings are there? Dozens, at least. Every day smart and compassionate people figure out how to transform just about anything into minimalist living quarters.

There are miniature geodesic domes, Conestoga huts, and Cardborigami collapsible, transportable shade structures. There are tiny houses made of hempcrete, which repels mold, rodents and insects; and hemp grows quickly and economically almost anywhere. There are not-so-tiny houses made from shipping containers.

A design website relates how University of Southern California architecture students invented shelters, including a combined shopping cart and tent. In response to one assignment, students…

[…] conceived a village consisting of modular units measuring 92 square feet (8.5 square metres). Some contain bedrooms, while others are combined to form bathroom facilities and communal rooms. The complex also is designed to have outdoor terraces and courtyards.

However, a report from a different publication brings up some troubling questions. For MercuryNews.com, Susan Abram describes one Homes for Hope unit as a “mini-modular home” that includes only bed, desk, and shelves. In other words, toilets, showers, and kitchens belong in other units, to be communally shared.

The writer comments on the highly portable rectangles:

Made of a steel frame with structural insulated panels and aluminum cladding, the units resemble camper shells, with sliding windows. They can be heated and cooled, and stacked to create a community on vacant lots for 30 people or less. Social services, a community space and bathroom facilities also could be provided with additional funding.

Let’s just pause for a moment and reflect on that sentence. “Bathroom facilities could also be provided.” Ya think? Abram explains the state law under which “emergency housing of no more than 30 beds can be opened in certain districts within a community” with no conditional use permit required.

Sounds like a stroll in the park, right? Wrong. She quotes some facts learned from project mentor Sofia Borges:

The next step is to get the units state certified so that the teams can begin mass production, Borges said. “If we get the unit itself pre-certified we don’t have to go through the permitting process each time we want to make more.”

That certification process, along other fees and licensing will cost $100,000. Individual units would cost about $25,000.

In what universe should the state be demanding a $100,000 bribe to okay such a simple item that could help so many people? The government presumably has a stake in housing the homeless. Why can’t it just give the green light? And $25,000 apiece, to make a cube with a bed, desk, and shelves in it? Really?

Endless creativity and originality are expended on turning out structures that are, in some cases, only a grade above cardboard boxes. Which is fine, because on a cold night, even a sheet of aluminum between you and the wind can make all the difference.

Based on rationales that range from baffling to incomprehensible, very few locales allow these minimalist solutions. The whole “tiny house” genre is riddled with restrictions, sanctions, ordinances, contradictions, and highly idiosyncratic rules — depending on the jurisdiction the project happens to lie in. In some places, a distinction is made between an actual dwelling and a “pod,” which might be a basic, no-frills box, and as long as it stays beneath a certain size, it’s allowed.

Two Januaries ago, Tucson, Arizona, was all in a tizzy over “dream pods,” basically plywood crates not much bigger than coffins, that activists constructed and brought downtown for people to live in. In March, after much controversy, orders were issued that they all had to go, along with every tent, lean-to, etc. Some of the dream pods were moved to the grounds of a church where they continued to be inhabited.

The problem beneath the problem is, literally, the rock-solid dilemma on which everything rests. It’s not that there aren’t enough housing units to live in, because there easily could be. There is plenty of encouragement for the recycling and repurposing of parts and materials. An enormous amount of ingenuity has been spent in designing units.

Among people experiencing homelessness and caring citizens, there is a great potential pool of volunteer labor. There is government money and private charity money — never as much as we might wish — but it is there, and obtainable by determined individuals and groups willing to do the work. But there is virtually nowhere to put tiny homes. Nobody wants shipping containers, or even storybook-cute mini-houses, anywhere near where they are.