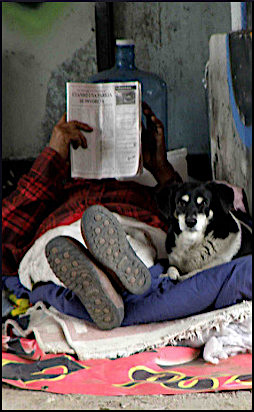 In some circles, Universal Basic Income (UBI) is an idea that sounds perfectly natural. After all, in ancient times when the hunters and gatherers brought home food, they shared it with everyone.

They could have eaten their babies, but they didn’t. Despite being totally useless, babies were fed. Beyond that, things got competitive.

Nature has decreed that a certain percentage of people is, for whatever reason, unable to contribute in a way that society can appreciate or sustain. In some times and places, the culture goes hardcore and says, “If they can’t work, throw them off the island.”

Today, such people are called faultlessly needy, because their state of dependency was none of their doing. But certain members of the most powerful caste have very strong feelings about these matters. To them, the most important thing is a solid conviction that everyone should have to work for a living, because it is morally wrong not to.

They may hide this judgment behind a veneer of concern, pretending to chiefly care about helping the person to self-actualize by earning a paycheck. Of course, many extensively disabled people are independent and self-supporting, but it should be an opportunity, rather than an ironclad rule. Some people are just not built for high levels of challenge.

Not everything that can be done, should be done

When the keepers of the common funds institute a work requirement, the whole dynamic changes, and even the faultlessly needy are recruited. Take the hypothetical example of a blind girl with musical talent. An employment absolutist would say, “Sure, technically you are faultless, but are you really, truly needy?”

An enormous amount of resources could be used to train her for a job she hates, and that necessitates constant dangerous interaction with a hostile world, when she would have done better to stay home and practice the violin. And maybe, after a few years, when she gets her 10,000 hours in, music might lead to an enormous paycheck. But bureaucrats are not taught or allowed to think this way.

A basic and rarely questioned presumption

There are people who perhaps can work; who maybe could work; who are healthy and able, but simply prefer not to work. The favored solution is to throw them overboard. In rare cases, like Alaska, natural resources allow bounty for all. More typically, ultra-rich individuals and corporations foot the bill for “welfare.” Naturally, they expect the recipients to be deserving. Somehow, the government employee in charge of distribution has to figure out how to distinguish between “can’t work” and “won’t work.”

There are arguments for and against “means testing.” But it’s way more complicated than just determining an applicant’s financial status.The trouble is, for the government to determine who is “deserving” and who is not, requires an unconscionable amount of snooping, as people who currently receive any kind of public assistance can attest.

Believe it or not, a form of UBI had a chance, for a brief time, in the USA in the late 1960s and early ’70s, according to the Dutch historian and author Rutger Bregman. In explaining “Why we should give free money to everyone,” he points out,

For the first time in history we are rich enough to finance a robust basic income. It would allow us to cut most of the benefits and supervision programs that the current social welfare system necessitates. Many tax rebates would be redundant. Further financing could come from (higher) taxing of capital, pollution and consumption.

[T]here is plenty of evidence that the great majority of people, regardless of what grants they would receive, want to work. Unemployment makes us very unhappy.

But wait, there is more, and some of it is pretty rude. He says…

[…] our social security systems have degenerated into perverse systems of social control. Thousands of government officials are kept busy keeping an eye on this fraud-sensitive bureaucracy. The welfare state was built to provide security but degenerated in a system of distrust and shame.

UBI is touted as a way to minimize expense, bureaucracy, political manipulation, and the bossy authority that some call paternalistic, and some call the nanny state. Reportedly, projects have been tried, or exist in various stages, in Canada, Finland, Kenya, Uganda, Italy, Switzerland; California, Alaska, Pennsylvania, Indiana, North Carolina, Seattle, and Denver. Armchair philosophers like to toss around ideas like, “How about we grant a basic lifetime income to anyone who gets sterilized?” One feature of UBI is the avoidance of such debates.

In “Atlas Nods: The Libertarian Case for a Basic Income” authors Miranda Perry Fleischer and Daniel Hemel speak of those who are “unwilling to consent to the exchange of liberty for the state.” There are people today who choose to remain destitute, rather than get involved with the government and what they regard as its invasive, demoralizing, and degrading ways. They are politely known as “treatment resistant.” The remarkable thing is, even if universal basic income were enacted with no strings attached, some people would still say no, because we’re Americans and that’s how we roll.

Possibly, another class of Americans would also refuse. In a less avaricious world, more people would feel that they have enough. A certain number of highly conscious folks would say, “No thanks, put it back in the general pool.” In all probability, UBI would not cost as much as doomsayers would have us believe.

March was Brain Injury Awareness Month, but in reality, so are the other 11 months of the year, and for some people, that goes on for years. Traumatic Brain Injury affects every aspect of a victim’s life. Please support organizations and legislators who are working on this.

To welcome The Home Coming statues, please join us Saturday, May 18, at 9 a.m. at Community First! Village. The address is:

Source: “Atlas Nods: The Libertarian Case for a Basic Income,” SSRN.com, 10/23/17
Source: “Why we should give free money to everyone,” TheCorrespondent.com, May 2009
Photo credit: lavocado@sbcglobal.net on Visualhunt/CC BY