Will Other Cities Learn From Seattle? 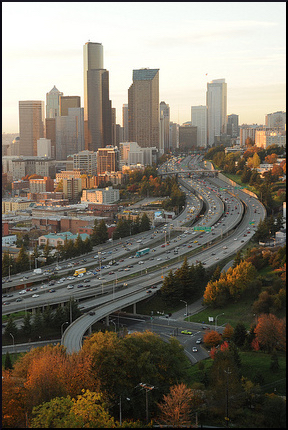 Innumerable factors go into causing homelessness, and when people get to the stage of actually experiencing homelessness, the same factors bedevil their lives even more. What happens when a city is taken over by a giant corporation whose activities touch every single aspect of life for its residents, whether housed or not?

We have been thinking about Seattle, where Amazon has been a significant presence for a decade. Why this, and why now? Because two new sub-headquarters are about to be established in New York City and the outskirts of Washington, D.C. They need to know what to watch out for.

There is something else. In the course of deciding where to build next, the giant corporation was handed a treasure trove of priceless information about conditions and plans in more than 200 other cities.

More saliently, the corporate overlords now know to the penny how much, in the form of incentives (aka bribes), each municipality would hand over in return for an Amazon facility of its own. Undoubtedly, other business giants are also quite interested in knowing these facts about cities.

Will Amazon sell them the massive collection of precious data that Amazon was handed for free? Undoubtedly! So it is probably a good idea for cities to keep a close eye on what actually happens when the 800-pound gorilla moves in… and compare the reality to the promises.

Six of one, half a dozen of the other

In Seattle, the reviews are mixed. Amazon has done some things that are applauded by some people, and is perfectly capable of publicizing its own good deeds. Meanwhile, the city came up with a phone app through which housed people, annoyed by the presence of unhoused people, could register complaints, more than 12,000 of them per year. The city also tried to pass a tax on the giant businesses to help out with affordable housing and services for people experiencing homelessness, but it was quickly squelched.

Then, in the Belltown area, the city carried out what is euphemistically called a sweep “in the shadow of the Space Needle” which is of course a local landmark. The people were given a week’s warning. A non-profit agency bought plane tickets (one-way, naturally) for a few, and a couple of people were relocated to a “tiny house” village. One person who was interviewed had been on a housing list for nine months.

Over the previous year, the number of vehicle dwellers in King County had increased by 46% or. In colloquial terms, it became half again as large. That’s a misdemeanor, and if a person is unable to pay the fines, the car is impounded, causing the person, as the National Law Center on Homelessness and Poverty phrased it, “to lose their shelter, transportation, and personal belongings in one fell swoop.” Who is supposed to be helped by these policies remains a mystery.

Eight miles from the city center, a cemetery suffered its second year of distress from the number of vans and RVs parked around it, generating an expensive and unacceptable trash problem. It’s bad for trees, too, which property owners tend to chop down when such places are encroached on by people with nowhere to live. As a solution, the city announced in August that the homeless camp removal squad or Navigation Team would be enlarged, bringing it to 30 members.

In theory, this would mean doing a better job. But resistance has stiffened. Vianna Davila reported for the Seattle Times,

Last year, on average, it took the team four interactions with residents before they accepted an offer to go inside; this year, St. Louis said, that’s increased to six interactions.

Enforcement was stepped up, with 46 camps obliterated in June and almost twice as many in July. Increasingly, the required 72-hour notice was being omitted, and about 40% of people were given no notice at all. Imagine going out (perhaps to look for work) and coming back to find your shelter and all your belongings had vanished.

In early August, the Seattle City Hall invited the Salvation Army to bring sleeping mats, earplugs and eye masks, so 80 people could sleep in the lobby. The basement has served as a shelter since 2006, and the need grows yearly. People can check in at 9:30 p.m. and sleep until 5:30 a.m., which is a brutal time to be turned out into the street, but still better than nothing.

The largest portion of this year’s homeless response budget — 44 percent, or $34 million — is reserved for emergency services, including shelters, permitted villages, and transitional housing. Twenty-nine percent of the budget is for more permanent housing, and only 8 percent is dedicated to helping prevent homelessness.

As long as we’re in emergency mode, it’s smoke and mirrors. It’s moving bodies around. It’s trying to deflect. It’s trying to create the impression that we’re addressing the underlying problems of homelessness, when emergency shelters simply don’t do it… Wanting to solve homelessness and researching, analyzing, and coming up with a coherent, effective plan to do so are two totally different things.