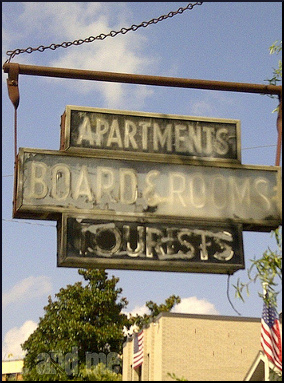 Advocating for people experiencing homelessness can take many forms. On the day-to-day plane of existence, there are meals to be prepared and served, medical needs to be met, paperwork to be sorted out, and so forth. Also, there is the big picture — the gigantic societal canvas where trends show up — and the fate of millions is decided by small covens of acquisitive people with questionable motives, and interests not aligned with the principle of the greatest good for the greatest number.

To anyone with the time and inclination to think about such things, certain patterns become apparent. Mostly, they are circular patterns that feed on each other endlessly. A typical vicious circle or cycle is examined in this post and subsequent ones.

In Los Angeles, homelessness has reportedly increased by 20% in only a couple of years. The city contains at least 382 motels, capable of accommodating 10,259 guests, though it is hard to know how these were counted because in the hospitality industry, “hotel” and “motel” have apparently become interchangeable words.

At any rate, motels are governed by all kinds of rules about who can stay where, and for how long. There is a difference between offering guest rooms for rent, and renting out housing.

Last month an ordinance was proposed to countermand the strict rules of earlier ordinances, making it easier for the formerly homeless to be housed in “transient residential buildings” such as hotels and motels. According to writer Elijah Chiland, most motels are “small enough to be reconfigured as makeshift housing without significant financial investment.”

But some odd details get in the way. Many motels are claimed to have inadequate on-site parking, although it is hard to understand why that would be a factor. The reasoning is not easy to grasp, because it seems like the semi-permanent residents would not require any more parking spaces than would be needed for travelers. One way or another, quite a lot would need to be done, to make the premises suitable for people who currently experience homelessness.

The expense would not be negligible. Chiland says:

In order to take advantage of the incentives, property owners would have to partner with local agencies to provide rental subsidies and on-site services to residents… The planning report notes that the number of units that could be made available as housing will depend on how many resources local agencies can spare.

When people come in from the cold, they may need a lot of on-site services, from addiction treatment to help in finding work. The refusal to rent out rooms unless professionals are “on the ground” to manage the tenants, sounds reasonable, prudent, and caring. But what if the already-strained local agencies can’t cut loose some personnel to fulfill the supportive housing requirement? Then, the deal is off. So it could also be back-handed way to slow down the whole conversion process, if anyone were politically motivated to do so.

What if power happens to be held by unfeeling bureaucrats who do not particularly care if the homeless are housed? If the staffing requirement is written inflexibly, that could incentivize administrators with other priorities to strike at the root of the effort. Agencies’ funding could be cut for the wrong reasons, leaving them with skeleton staffs and no people to spare for new-fangled motel conversion plans.

Then, there is another wrinkle, affecting both the potential tenants and the finances of the whole project. A spokesperson from the L.A. City Attorney’s Office said that “Motel owners appreciate the chance to maintain ownership of the property and revert back to being a motel after the contract expires.”

In the past, homeless service providers looking to expand temporary housing and shelters have turned to nuisance motels as prime, structurally appropriate properties for conversion.

“Nuisance motel,” short for “public nuisance motel,” is a term that has been around for a while, and applies to places that are under-maintained and mostly occupied by people who would otherwise be homeless. These would be the first choice of places for conversion into short-term housing under the control of agencies working with people experiencing homelessness. But many do not conform with current zoning regulations, which might, for instance, require that kitchens be added to the rooms.

On the East Coast, New Jersey also struggles with the “nuisance motel” question. News stories talk about how they endanger health and safety, and are rife with unlawful conduct such as “numerous open-air incidents” of drug sales. One particular account spoke of a raid that resulted in the arrests of 15 people for “offenses ranging from possession of controlled dangerous substances to distribution of controlled dangerous substances.”

But what are they talking about here? A meth lab that’s going to blow up the whole place? Or some people using and selling marijuana, which is a whole different kettle of fish?

One motel was blamed for more than 900 calls to police since 2013, which might be four or five years depending how you count. So, say, four years, or 1,460 days, divided by 900, which is about one call every one-and-a half days. Which sounds pretty bad. But how many of those calls were generated by the desire to label the place a “criminal nuisance” location, and shut it down, displacing the inhabitants once again?