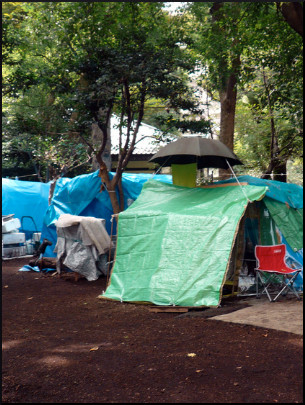 The cops used to come by a few times a year, now it’s twice a night.

That is what Ray Lyall, resident of the Denver streets, said to LA Times reporter David Kelly. The police “come by” to roust people who live outside, tell them to move on to another location, and, often, throw away their belongings. Kelly also includes a quote from an official who asks, in a rhetorical sort of way, “Who could have foreseen the great recession?”

The question sounds disingenuous, until the reader understands that the speaker works for a city agency with an agenda. On the contrary, in the days since 2008, it has become clear that the crippling economic crisis could have been, and was, foreseen by the people who engineered it. But as long as they and their friends profited from the recession, at the cost of everyone else, they didn’t care. Bennie Milliner also said this:

The homeless problem was greatly exacerbated by the housing downturn and the bursting of the housing bubble.

… To which Kelly adds:

Now the opposite is true. The Denver-Aurora metro area has seen a 26% increase in home prices over the last two years, one of the highest in the country.

Consider that telling phrase, “Now the opposite is true.” In other words, both general prosperity and the lack of general prosperity are causes of homelessness. Any society in which both things are true is a society that has something basically wrong with it.

This point of view is not unique. Kelly notes that “critics believe the city is applying bandages when major surgery is needed.” The American Civil Liberties Union says that Denver, other Colorado cities, and municipalities all over the nation are criminalizing homelessness.

A particular type of news story has become very common as it emanates from one city after another. There is a fire at a homeless encampment, and immediately the citizens cry for the camp to be abolished, and police and city workers do a “sweep” to push all the inhabitants out of the area. Makeshift shelters are torn down; tents, tarpaulins, and bedding are loaded into trucks and taken to the landfill. The fact that there was a fire (or some other incident) is used to justify making a gigantic leap to the idea that no settlements should exist.

There are much better reasons for society to decide that it is not good for people to experience homelessness in random encampments. The best reason for camps to be abolished would be if the inhabitants had some other place to go and live, but this is seldom the case. When something bad happens in a shantytown, housed people have a thoughtless, knee-jerk impulse to tear down the impromptu village.

But strangely, when there is a conflagration in an apartment building, nobody goes public with a demand to abolish all apartment buildings. When a private home catches fire, citizens don’t rise up and agitate for bulldozers to move in and level neighborhoods of single-family dwellings.

This comparison could be extended almost endlessly. When a school, grocery store, or church catches fire, no sane person proposes that schools, grocery stores, or churches should be banned. Kelly also quoted the manager of the Denver Rescue Mission, who confided that the encampments wiped out by authorities were “rife with gambling, drug dealing and prostitution.” Steve Walkup went on to say:

But they’ll probably rebuild their shantytowns. One will go up and another and another.

But pause and consider… A certain Nevada locale is rife with gambling, drugs, and prostitution, yet hardly anyone suggests nuking Las Vegas. When an outdated structure is demolished, very few people shake their heads and say, “But they’ll probably rebuild their hotels and casinos. One will go up and another and another.” Of course they will. Only a very naive or oblivious person is surprised by anything that happens in such a capital of commerce, because that is its nature.

And what happens in any city where thousands of people have nowhere to live should not be surprising either. Of course, camps form. Small communities are established, and in those rough-and-ready colonies are all kinds of humans, including people with a work ethic and moochers who just want to coast; and conscientious neighbors, and careless jerks who allow fires to start.

There are some virtually helpless people, and some who can cope with anything life throws at them. Some whose ideals and principles never waver, and some desperate enough to try anything. In short, people experiencing homelessness, who live in camps, are pretty much like people in rowhouses and highrises, except more exposed and vulnerable. Otherwise, the differences are superficial.