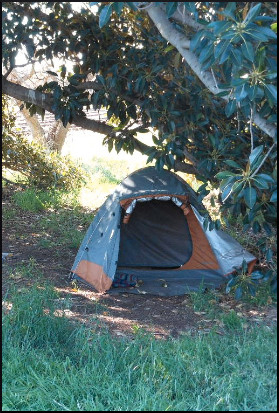 We recommend our own newsletter’s succinct description of the report on the criminalization of homelessness, recently released by the National Law Center on Homelessness & Poverty. Of this effort, House the Homeless President Richard R. Troxell says:

Advocates from around the country are uniting to expose and defeat the criminalization of homelessness that creates devastating barriers preventing people from getting living wage jobs and affordable housing that would enable them to escape homelessness.

The creators of this report, titled “Housing Not Handcuffs,” gathered information from 187 American cities and learned that nearly half of them prohibit sitting or lying down in public. In other words, the person experiencing homelessness is expected to stay on her or his feet at all times.

But that is not sufficient, because standing still is also forbidden, under the verbiage of loitering, loafing, or vagrancy. If one wants to stay legal, a mere upright stance is not enough. For a street person, the only acceptable option is to remain in motion at all times.

And even that is not a satisfactory concession to public demand, because walking can be done only in certain geographical areas. Now, you might think that someone who owns a car or van could escape this problem by spending as much time as possible sitting inside of it, out of everyone’s way. But living in a vehicle is forbidden in 39% of the cities that were surveyed.

Of course there are settlements all over these cities, and the “move along” philosophy applies to groups of people, as well as to individuals. The way that cities choose to deal with camps is to cause them to uproot and relocate with senseless frequency. Maybe the basic logic is fairness to the housed people — to give each neighborhood some relief, for a while, from the unsightly, disturbing, and scary specter of people who not only failed to grab the brass ring, but couldn’t even find the merry-go-round.

The homeless scene is always in a state of flux. It changes day to day, month to month, year to year. But the basic game seems to stay the same. One week the cops will be crunching you for one thing. The next week its OK to do that but they’re crunching you for something else. One week is OK to hang out on one side of the sidewalk. The next week they kick us off that side and say we gotta hang out on the other side. And the next week they reverse it again. Round and round it goes.

The crime of “breathing while homeless” isn’t on the books in those exact words, but it might as well be. By deeming a large segment of the national population to be guilty of it, municipalities have virtually created a huge crime wave.

Here are just three of the many key findings from “Housing Not Handcuffs”:

Despite a lack of affordable housing and shelter space, many cities have chosen to criminally or civilly punish people living on the street for doing what any human being must do to survive.

Local governments are engaged in problematic enforcement of these laws.

Local governments are banishing homeless people from public places through use of “move on” orders and trespass warnings.

At the end of this page is a list of five previous posts on the “breathing while homeless” concept. For NBC in Berkeley, Stephanie Chuang and Shawn Murphy had this to say about California’s particularly aggressive anti-homeless ordinances:

Such an approach ends up being costly, as police and incarceration resources are marshaled to deal with the citations. Simply offering services and housing, on the other hand, has been found to save far more money. The federal government has also taken steps recently that indicates it considers the approach of criminalizing homelessness to be unconstitutional and will withhold federal funding from those places that engage in it.

It is the local city governments (at the behest of the local businesses) that have passed the criminalization laws. This puts our municipalities in direct conflict with the Federal government. Specifically, the Department of Justice has echoed Mr. Troxell and other homeless advocates starting with Michael Stoops, National Coalition for the Homeless, who decry these laws and tag them as barriers to ending homelessness. At the same time, the Federal government is simultaneously providing our cities millions of dollars to fight a seeming by never ending battle to end homelessness.