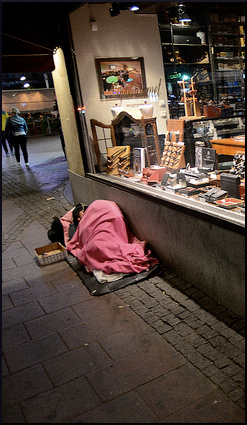 Remember State Representative Tom Brower of Hawaii, who got headlines by destroying a bunch of shopping carts? In a followup story, Brower expressed only one regret: that some people had interpreted his berserker sledge-hammer rampage as an “attack on the homeless.”

Apparently still puzzled about why anyone would think that, a couple of years later he was filming residents of a homeless camp without their permission, and some teenage boys asked him to delete the pictures he had taken, and he refused, and they roughed him up.

A short time later Brower told the press he was not angry, and would continue to stay “in touch with the community” in the same way. Two weeks after that, he decided to press charges against at least one of the youths. Apparently, voters are content with all this, as Brower was reelected again just three months ago.

In a Nation of Change opinion piece, Prof. Carol Caton, whose expertise is in the sociomedical sciences, addressed the issue of Americans with severe mental illness. She proposed that the government would be foolish to defund what has proven to be “a cost-effective intervention that provides a solution to homelessness.”

What is this intervention? According to Caton:

Unlike the temporary respite provided by crisis shelters, it provides access to permanent housing, mental health treatment and support from mental health professionals to guide the adjustment from homelessness to stable residence in the community.

There is no increase in net public cost compared to street and shelter living… Cutting funds to house the homeless would cost us more money than it would save.

Those last two sentences are important. When something needs to be done about a harmful situation, humane reasons are very often insufficient. Several federal agencies provide funding to aid those who are both mentally ill and experiencing homelessness, and the taxpaying public needs to be reassured that the bottom line will not suffer. Fortunately, dedicated people and organizations keep close track of the numbers, and can verify the savings to the public wallet.

Supportive housing means less use of homeless shelters, psychiatric hospitals, or community hospital emergency rooms; less expenditure for legal aid and other costly public services; and certainly less criminal incarceration. The movement took hold in the early 1980s, and the journey has never been easy. Over a nine-year period ending in 2016, it helped reduce the particular category of homelessness known as “chronic” by 35%.

Still, there is a great shortage of supportive housing units, not nearly enough to fill the need, and the threat of losing the existing facilities is appalling. Significant funding comes from the departments of Housing and Urban Development, and Health and Human Services — or did, anyway, up until the next round of budget cuts. Four states pitch in some dollars, and so does the occasional county or city government. There are even charitable donations and a modicum of support from private foundations. Still, the prognosis is not good.

An estimated one-third of homeless people suffer from mental illness, “often compounded by multiple health problems and substance abuse.” At the mention of substance abuse, a segment of the public has the knee-jerk reaction of “Let them go, it’s no loss.” But moral judgments are not productive. The only difference between a rich alcoholic and a poor alcoholic is that one of them can afford rehab in Malibu.

Leaving aside the question of bad lifestyle choices, there actually are people who are too disabled to work for reasons they had nothing to do with causing. A person with shaken baby syndrome never had a chance. A veteran is very likely to suffer from traumatic brain injury. Do we want soldiers thinking they made a bad lifestyle choice?

Source: “Hawaii politician opens up about assault near homeless encampment: ‘I have no ill will to anyone’,” NYDailyNews.com, 07/03/15
Source: “How funding to house mentally ill, homeless is a financial gain, not drain,” NationOfChange.org, 05/10/17
Photo credit: J.RISTANIEMI via Visualhunt/CC BY-ND