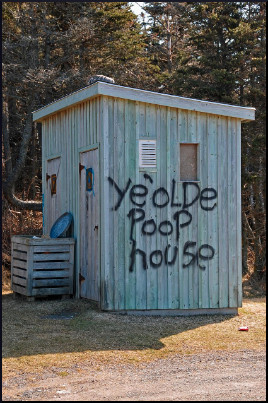 Incredibly, people don’t seem to understand the repercussions that a criminal conviction can have on a person’s life. Those who perceive “the homeless” as members of a different species don’t seem to stop and think at all. Their war cry is “Get a job!” — yet they appear to have no clue about the policies of potential employers regarding past offenses.

While demanding “Get a job!,” harsh critics find the time and energy to convince lawmakers to punish humans for the most life-essential activities. Many people experiencing homelessness are served with legal paperwork for performing necessary natural functions.

Sure, a small percentage are needlessly gross, and take perverse pleasure in sullying the environment. But then, so do some wealthy and privileged college students.

Speaking of which… Remember how, only a year ago, the New York Post stirred public outrage by assigning a squadron of reporters — allegedly, 16 of them — to follow around a schizophrenic man and take a picture of him urinating in the street? He was called a “peeing menace,” a “foul-smelling vagrant,” and a “disgusting derelict” by the seven journalists who collaborated to write up the vital news. Then, The New York Times appropriated the story, allotting it 1,500 words crafted by three reporters. Although the venerable paper of record had no suggestions toward solving the homeless restroom problem,

They did, however, offer a solution for wealthy people who had already been charged with public urination and wanted to spend about $1,000 to get their ticket changed to “littering.”

In cities, of course the lack of restrooms has societal effects. Business owners find human waste in bushes, on sidewalks, in alleys and parking lots and garages, and sometimes in front of their doors. Downtown residents and visitors aren’t happy either. Some urban areas are said to stink for blocks. In parks, dog owners are against human poop, because their dogs like to roll around in anything malodorous and wear it home on their fur.

California is a mess

Staff members have witnessed the homeless emptying their “potty buckets” in the bushes near the back entrance of the courthouse, and observed feces in the bushes adjacent to the courthouse as well as in the stairwell in the library-parking garage. There is a constant puddle of urine by the east side of the building at the base of the emergency stairwell, and individuals often urinate very near the courthouse, occasionally in front of courthouse windows.

You’d think the officials would have gotten a clue, after the first few days, and made sanitation arrangements, but apparently this situation has been ongoing for some time.

In Salinas, people camped in the alley behind the local Buddhist Temple, and “about 30 bags of human waste” were reportedly flung into the backyard of a local minister. In San Francisco, where they paint walls with hydrophobic paint that guarantees urine splash-back, Debra J. Saunders reported:

Monday night, a light pole corroded by urine collapsed and crashed onto a car, narrowly missing the driver.

As of two months ago, according to an online report, this was the situation in a place that reportedly attracts 16 million tourists per year:

Back in 2012, DearDirtyAmerica.com published a wickedly satirical “news” item which announced then-mayor Mayor Antonio Villaraigosa’s plan to build a giant sandbox where people experiencing homelessness could take care of their needs:

Instruction placards showing a homeless person how to properly relieve himself would hang around the tall chain-linked fence shielding the sandbox from the outside. “We could have a few city officials the first couple of weeks training people how to squat, or basically do their business with as little hassle or mess as possible,” Villaraigosa said.

Some officials are unintentionally self-satirical, as in this item from Oregon:

While volunteering at a warming shelter this winter, Salem Mayor Anna Peterson says she learned the number one request from the homeless is toilets. She says it’s a basic human need…

Well, duh! Isn’t it mind-boggling, how a grown adult, who runs a city, has just now learned that elimination is a basic human need?

NOTE: Next time, we will look at some “best practices” in this realm.