Prison As Shelter in the U.S.A. 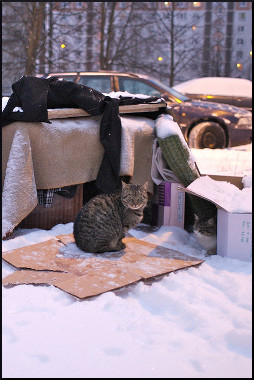 In Wisconsin Death Trip, Michael Lesy retrieves true news about America in the late 1800s. Even then, an arsonist who didn’t get caught might have to turn himself in, because the whole point of the crime was to get in out of the weather and be fed.

House the Homeless recently took a world tour of news stories about people who prefer jail to the streets or shelters. Today, the focus is on the United States.

In Michigan, Michael Morgan was arrested for minor offenses 105 times in 18 years, and managed to stay locked up for about half of those years. Journalist Anthony Bartkewicz wrote:

Morgan admitted to getting arrested on purpose at times so he could have “three meals a day and roof over my head when it’s cold outside,” but he hopes to break the cycle one day.

In Texas, Jonathan Harrison repeatedly called the police emergency line asking for baby aspirin and a place to stay. When an officer arrived to talk with him, Harrison was found to be holding marijuana, which the officer confiscated. So Harrison called 911 again, demanding that his marijuana be returned and threatening to call the media. He did finally manage to get arrested and jailed that night.

An Ohio woman asked pharmacy personnel to call the police to give her a ride to a homeless shelter. The police arrived, but said that giving her a ride was not their job. The local newspaper reported:

The woman then demanded to be taken to jail, but officers said she had committed no crime. She then approached the store pharmacy counter and yelled that she was going to rob the pharmacist. She then refused to leave the store unless she was under arrest…

It worked, as she was charged with disorderly conduct and taken to jail.

In Montana, a 27-year-old man stole a bottle of beer, drank it while waiting outside for the authorities to arrive, and told the sheriff’s people that he wanted to go to jail. The local newspaper reported:

Matauaina, who was born in American Samoa, has been in Butte for several months, and apparently continues to commit petty crimes to get out of the cold, authorities said.

In Illinois, a man broke a drug store window on purpose. His written statement included the information that he was careful to wait until no customers were within range, before throwing bricks through the glass. He also told the police that he had run out of money to rent motel rooms. Journalist Lorraine Swanson wrote, “He wanted to get arrested to so he could go back to jail and get home, according to the charges.”

Bricks are very popular. In Missouri, a man described as “desperate to go back to jail” pursued his goal by using bricks to bash police cars. Officer Michael Herschberger, told a reporter:

A lot of the homeless have problems where they’ve been banned or they’re no longer permitted in shelters that can house them in times that are cold. Some of them take measures of getting arrested so they can have a place to get out of the cold.

Police told the man to just come into the station, next time, and report himself for trespassing on police property.

A Georgia man, recently released from prison, wanted to go back because he was homeless and hungry, and did not intend to spend another night on the streets. The Lance Brown story is rather complicated, and is best understood from the original reportage, but one detail stands out. Brown first tried threatening to kill the president, but was not taken seriously.

Only then did the hurl his brick through the window of the U.S. Post Office and Federal Court Building. After a great deal of inconvenience for everyone, he was sentenced to a month in jail and six months in a halfway house, which is not much of a win.

In Boise, Idaho, the penalty for sleeping outside was $1,000 and/or a six-month jail sentence. And $150 for court costs. Richard Morgan wrote:

Most of those ticketed spend time in jail, which in my opinion has better facilities and room per person than the shelters and you are not kicked out all day, no matter what the weather.

Volusia County, Florida, eventually figured out that a pool of about 50 people experiencing homelessness had cost the taxpayers $12 million over the past few decades, but…

The $12 million only covers basic expenses to get a suspect in the back of a police car and inside a courtroom for the first time. The tally would climb by millions if it was combined with the $65 per day it costs to incarcerate someone in Volusia County and cover their medical bills.

James Purdy, a former prosecutor turned Public Defender, told the press that between five and 10 homeless people every month purposely try to get into jail, and it seems to correlate with when their social security checks run out, and this ruse has been an “open secret” all along.