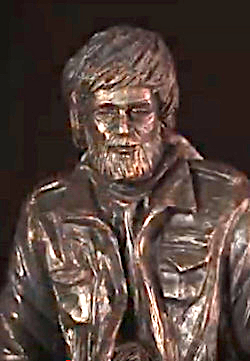 House the Homeless talks a lot about American military veterans, because they are said to make up one-third of the national population of people experiencing homelessness. A case could be made that no one, of any political persuasion whatsoever, is pleased.

No matter what angle it is viewed from, something is wrong with that picture. A veteran is one of the figures in the sculpture grouping that will soon find its place in Austin, TX. It’s called The Home Coming.

What happens during this moment frozen in time? John and his daughter Colleen encounter a fire barrel, and as they enjoy its warmth, an elderly “bag lady” approaches. The little girl motions to her, the man says “Join us,” and after a moment’s hesitation, she does.

Where was John before? Up until recently, he was overseas in a combat zone. Like so many others, he did not really grasp who our forces were fighting for, or why. They might have heard the phrase “military industrial complex,” but they didn’t recognize its intimate association with the apparent need to protect the American way.

Joining up felt like the right thing to do, but returning to face indifference and even hostility didn’t feel so great. He sometimes thought of the Phil Ochs song that went, “Poisoned players of a grizzly game, one is guilty and the other gets to point the blame.”

And another lyric by the same artist: “I must have killed a million men, and now they want me back again, but I ain’t marchin’ any more.”

A lot of returning veterans sustained physical disabilities during their tours of duty, and came back to find that the government departments charged with meeting their medical needs were in disarray. Many had mental and emotional issues. It was all too much to cope with. Having lost valuables both concrete and intangible, a lot of them gave up.

Things have not changed much since then. While working as a mental health professional at Men’s Life Skills Center in Los Angeles, Nick Holt went to remote areas in search of society’s dropouts. He wrote,

A veteran is someone who, at one point in his/her life, wrote a blank check made payable to The United States of America, for an amount of up to and including their life. My daily work is typically working with veterans who are ineligible for U.S. Department of Veterans Affairs services.

Many of the veterans I work with do not see an issue with the manner they are living their lives. They have no interest in mental health; let alone think of themselves as someone with a mental health issue.

Holt also passed on to readers the four lessons he learned from homeless veterans, quoted and/or paraphrased here. First, the human connections enjoyed by many homeless vets range from minimal to nonexistent. They have been there, done that, and concluded that having no relationship is better than having a negative one. But it’s not necessarily a permanent condition.

The second lesson is beautifully phrased:

They have faced enormous challenges, but demonstrate resilience, bravery and hopefulness in their determination to try again.

In creating a relationship with a skittish person, one of the professional secrets is to assume the best. Take it for granted that the person is not weak, but strong. Assume that clients are adults with rights and dignity and a capacity for bouncing back. At the very least, the outreach worker can be trained to present a neutral, nonjudgmental persona.

Also, homelessness and trauma are a vicious cycle, creating a sinister spiral that can be stopped. Get somebody under a roof, and you’ll be amazed at their ability to thrive. Third:

The odds are stacked against them, but they remain humorous, playful and creative.

In other words, just the kind of folks who could turn into great neighbors and employees, if given the chance.

The fourth lesson Holt came away with is that maybe the rest of society should listen and pay attention:

Homeless veterans know what they want and what they do not want, and they are happy to share their views with you. Unfortunately, their expressiveness and assertiveness can be perceived as aggressiveness (and sometimes is).

One way or another, voices will be heard. Here is where mental health professionals shine. They can help a person learn to channel aggressiveness into its socially acceptable version, assertiveness, and get things done. Housed people with the NIMBY mindset, and businesses with a vested interest in the perpetuation of zoning ordinances, are responsible for a tremendous waste of humanity.

In many cases, you’re looking at people who have been trained by the U.S. government to be dropped in a hostile environment with few resources, and survive. Compared to that, figuring out how to survive in America is a piece of cake. Throw in some opportunity, and who knows what such resilient people could accomplish.

Such a person might, for instance, devote decades to helping others, and write a book like Looking Up at the Bottom Line.