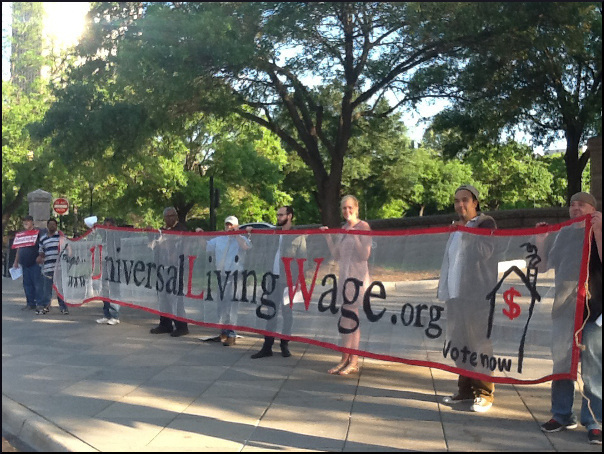 In Emeryville (in California’s Bay Area) the City Council decided to incrementally raise its minimum wage for workplaces with 55 or fewer employees. It went to $13 per hour in 2016, then $14 the next year, and $15 in 2018, and this coming July it goes up to $16.

Yes, some lucky locals can now get away with working only 48 to 60 hours per week, instead of 80. Journalist Matthew Desmond lists some of the effects of a reasonable minimum wage. For instance, the Georgia Institute of Technology found that raising the minimum by even $1 per hour cuts down reports of child neglect by almost 10 percent. This is because it helps parents pay the utility bills and keep food in the cupboard.

The public health benefits are undeniable. As Desmond says,

The chronic stress that accompanies poverty can be seen at the cellular level. It has been linked to a wide array of adverse conditions, from maternal health problems to tumor growth…

Low wages are an affront to basic dignity. They make people feel small, insignificant and powerless. Subjectively experiencing these feelings can have real health consequences beyond the material hardships of poverty.

With a higher minimum wage, a community sees declines in smoking, teen alcohol use, teen pregnancies, low-birthweight babies, and domestic violence — all things that we definitely need less of. People sleep better, suffer less depression, and are less likely to overeat from stress. Businesses make money because people have money to spend. When there is less incentive for crime, the cost of policing goes down.

And of course, when people have a living wage in their pocket we can stimulate the economy both locally and nationally because folks all need the same thing…housing. So, now that people have that money, the housing industry will create that housing in a heart beat.

Even better than minimum wage — ULW

Minimum wage laws seem to have finally become an accepted principle, although there is disagreement about what the minimum should be. In France it is set at 60 percent of median income; in England at 46 percent. In the United States the formula is complicated, but hovers around 40 percent. The thing about the Universal Living Wage is that it has a different way of calculating its math, one that takes into consideration the local conditions, because after all, this is a nation of a thousand economies.

We recommend “Economic Recovery — Fixing the Economy,” the very full explanation authored by House the Homeless co-founder and President Richard R. Troxell. Another way to absorb these ideas is via Richard’s discussion with Wayne Hurlbert of Blog Talk Radio. Meanwhile, here is the elevator pitch:

The Universal Living Wage formula ensures that anyone working 40 hours in a week can afford the bare necessities of civilized life: food, clothing, shelter, including utilities, and transportation to and from work. That is not a lot to ask, and the employers who benefit from the workers’ labor ought to pay them enough to live on without resorting to public assistance.

One size does not fit all: $7.25 an hour in Austin is not the same as in a small town. As a responsible Community Partner, a business needs to pay a fair living wage for the area. Crazy plan, right? So crazy, the U.S. military uses it. When personnel live off base, their housing allowance is indexed to the local conditions. Minimum wage just needs to be tweaked a bit, into the Universal Living Wage, which could both cure and prevent homelessness for an awful lot of Americans.

ULW and UBI — why not both?

The Universal Living Wage is different from the Universal Basic Income (UBI), which we discussed in two recent posts. They could potentially both exist at the same time, and why not? Why shouldn’t people be fairly compensated for working, if they can, and if there are jobs? Don’t they deserve a little extra help at the same time?

Universal Basic Income is mischaracterized, and some weird ideas are circulating about what so-called “free money” does to people. But we need to think about what it does for people, to be lifted above bare subsistence. UBI would apply to everyone equally — rich or poor; disabled or fully functional; employed or unemployed. It would provide enough to prevent starvation, and hopefully, for rudimentary shelter, especially if Richard’s dream of reviving institutions like the YMCA and YWCA could be realized.

Some complain, “But then everyone would just sit around.” Realistically, it is silly to worry that people will not want to work, when jobs keep drying up. Every day, more jobs are automated, shipped overseas, or both. Soon, even more people will have no jobs. It would be better for everyone if they had a way to survive.

What if everybody didn’t have to work so much?

Third-world residents take out micro-loans to buy goats or chickens, and are able to repay within a year. Surely, a percentage of Americans would figure out how to turn a dependable pittance (like a UBI payment) into a livable income. Millions have already used their entrepreneurial genius to achieve success. We haven’t forgotten how. UBI could embolden a person to ditch a crummy job for an independent venture, and that crummy job would then be available for someone else — a win/win!

For a person who could technically scrape by on UBI, but also held down a job, that extra could make the difference between having health insurance or not. It could let them hire an exam coach for their nephew. In other words, having a modest cushion could allow for self-betterment, in the honored American tradition.

Maybe people who work less will volunteer more, to the immeasurable benefit of their communities. Just imagine if parents didn’t have to put in so many work hours, and could spend more time with their kids.

The proposition that nobody works unless they have to is ridiculous on its face, and here is the proof: Lots of people in America have millions of dollars, and yet they keep on grinding. There is no evidence that hating work is a catastrophically widespread trait. The really ineradicable human characteristic is always wanting more, more, more.

The Home Coming statues have arrived in Austin!

Please join us on Saturday, May 18, at 9 a.m., for the unveiling of The Home Coming statues at Mobile Loaves & Fishes Community First! Village, 9301 Hog Eye Road, Austin, TX 78724 (map). You can register here (required).

Parking will be limited, so please carpool if at all possible. There will be coffee, breakfast tacos, and live music! If you’re traveling from downtown take the route 6 bus (East 12th) from 7th & Colorado. The bus leaves at 6:58 and 7:58 a.m.