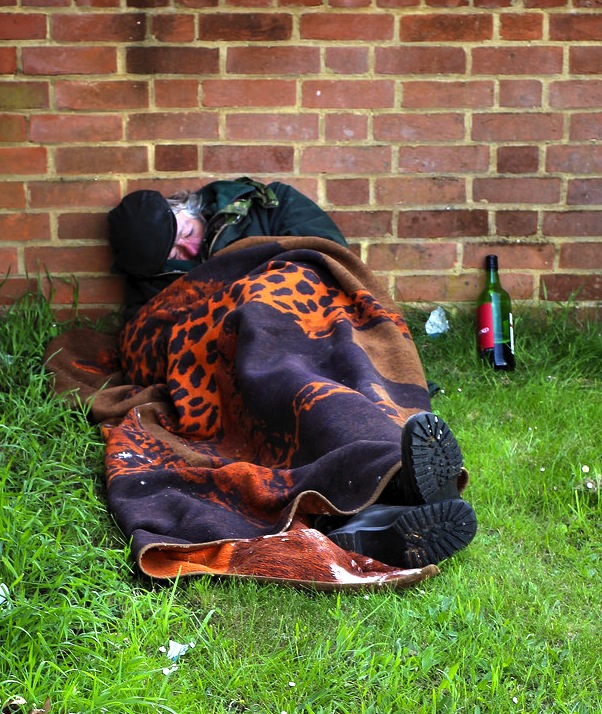 Here is an electrifying sentence from a long-form piece by John Flynn and Matt Kramer:

Later, Courtney Collins, daughter of one of the deceased men, testified before the city council:

I was terrified to find out about the very legal confiscation of blankets, sleeping bags and other sources of warmth and shelter for those living on the streets by the police… I have been unraveling truths so ugly, it feels impossible to go up against such a monstrous system.

This current and ongoing crisis in the state capitol of California was seen by Flynn and Kramer as a fitting occasion to tell the story of another homeless man, an activist who once spoke to a crowd from the steps of the Capitol building. This genre of news story is known as “putting a human face on” a tragedy — in this case, homelessness. The face they chose was that of Russell Bartholow, who is also deceased, although not one of those who died during the storm.

His history, like many others, should be a wake-up call for people who don’t believe that homelessness could ever be their fate. It is no exaggeration to say that millions of Americans are one paycheck away from living on the streets.

The writers go back to their subject’s childhood, when he was the last of 60 foster children sheltered by Gertrude Bartholow, who legally adopted him. His niece Jessica remembers him as “beyond normally brilliant” in math and science.

In high school, the Native American youth was kicked in the head in a racially motivated incident. As House the Homeless readers well know, an astonishingly high proportion of people experiencing homelessness suffer from traumatic brain injury.

Bartholow spent some years as a single man, then married and had a son, then returned to his childhood home to care for his adopted mother and her husband. “But in 2000,” the writers say, “he was arrested for a drug-related offense.” The particular crime is not specified, but in general, this fact is another proof of the counterproductive nature of the War on Some Drugs and All Adults.

It was only serious enough to put him in jail for a month — during which his parents died and relatives sold the home. Once released, living with his wife and son was apparently no longer an option, and Bartholow began his 15-year residence beneath a bridge.

Like thousands of others in Sacramento County, once he found himself on the streets, he entered an alternate reality where the government couldn’t hear him; where those supposed to help instead focused on erasing his existence; and where the only permanent home the county offered him was in jail. It’s a system that feeds on absurdity, in which homelessness can cost more than a Midtown loft and survival is a crime.

Soliciting, panhandling and sleeping are some of the activities forbidden to unhoused citizens of Sacramento. Bartholow was cited 190 times, sometimes twice in one day, for these offenses, with the police often acting like inundating him with legal problems was all a big game. Technically, he owed more than $100,000 in fines.

The taxpayers paid to host him for more than 100 days in jail. His biography continues:

Though a full 132 of Russell’s cases were either dismissed or had their fines waived, there were other costs. Being in jail caused Russell to miss appointments to obtain government assistance, as part of eight attempts over 13 years to get money for which he qualified due to the lingering effects of the brain injury, which he believed contributed to paranoia and drug addiction. To pay for living expenses and fines, Russell turned to panhandling or selling flowers — which only led to more arrests.

The speech Bartholow gave in February of 2015 promoted the adoption of a Right to Rest Act, The No Sit/No Lie Ordinance and the Americans with Disabilities Act. But the effort failed, and many activities associated with homelessness remained criminalized, partly because politicians have a habit of ignoring the most basic truths about what is going on out there.